Guest on the Nerd Out 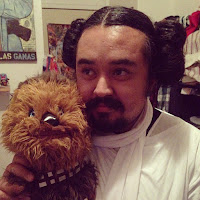 It should come to no surprise to anyone who knows me that I love being a nerd, geek, dork, otaku etc. I dressed up as Princess Leia for pete's sake. In my circle of friends, I rarely get the chance to nerd out because I'm just too cool and no one else can keep up with me. You have to understand that I'm not some casual fan or really into whatever. No, it goes way deeper than that for me. Right down to my core really. I learned pop culture and the English language from watching the Simpsons and 90s sitcoms. I formulated my identity through comic book characters before I knew what to call myself. The nerd life taught me life lessons that I still use today, no joke.
That's why I was excited to be on the Nerd Out with the homie Ritzy Periwinkle and her homie La Lisa. We got to talking about all sorts of stuff, specially after a few glasses of Jameson. Listen to the show here and be sure to follow the Nerd Out #nerdsuphosdown.
Writen by El Random Hero at 9:26 PM

I don't have the best relationship with my family and that's ok. Growing up I always wondered why my family wasn't like the ones I saw on tv. It took a minute for me to catch on and realize why my family was nothing like the ones I saw on tv, despite finding things here and there in common. However, my family was nothing like my friends families either. While we were all Latinos/as, I would hear stories of relatives doing this and that. Of parties, traditions, and rights of passage that seem like everyone except me went through. It took me longer to figure out all of that than it did to learn to play along and just agree with everyone else so as to avoid being singled out or awkward. Lotta good that did me.

Then there's the whole being undocumented thing as well. For years I thought that was the singularity that separated my familial experiences from everyone else's. No, turns out that wasn't it either. I realized that once I got involved in DREAM Act/immigrant rights organizing spaces. While everyone else shared stories of perseverance and aspiration, I just kept making comic book references. Every other person would mention what their families sacrifice for us to be here and have a better life. That we persevered and fought for our families and all this and all that. I never identified with any of that, but I did agree to it for the sake of being part of the group and again, not being one to be singled out and make things awkward.

It's so much easier to just agree with folks and be done with it than trying to stick out and counter them. That's pretty much how I still go about things when someone inquires as to my family. It's easier for me to tell them what they wanna hear so they'll leave me alone and not ask about it again till I bring it up or there's some sort of parental holiday around the corner. While I share some of the dysfunction that's in my family, it is never more than what others share when talking about there's. It's in that dysfunction that common ties are found and we can all look at each other and say, 'you're family is just like my family. Let us laugh out loud and go on about our day."

It has taken me years of processing mentally and emotionally to be where I am with my family right now. For so long it was easy to just blame everything on them because I had no control over anything. I didn't get to choose what school I went to, where we lived, how I spent my free time or any of that adolescent growing up stuff. I was a kid, of course I didn't have control over anything, let alone any kind of understanding. In those times, I felt robbed and cheated outta things. I always questioned why I couldn't hang out with friends and why I had to help with the family business. Why did I have to work while everyone else was having fun, stuff like that.

I get all of that now and I realize how important those experiences are in my development as an individual, but that still doesn't excuse them. I still carry some of that anger and frustration with me, but not out of resentment. No, it's more along the lines with tragedy really. My biggest turn around point came when I realized how my parents raise me and my sisters. The rotten tree didn't start with either of them, but with their own families. I heard how they grew up and what they went through and it clicked you know. I saw why things played out a certain way, usually a violent way. Why there was never any understanding, talking or even the sharing of any kind of affection. That shit was just implied and done out of some guilt trip so as to not feel left out and awkward.

I realized that I will never get that kind of relationship I wanted with my parents because they never had those kinds of relationships themselves. What's that you say? I can be the bigger person? I could drop the decades of drama and trauma and create the relationship I want? Nah, it don't work like that B. It's already draining enough to change what I learned from them, let alone trying to save them. Nah son, things don't work that way. Not everyone can have a healthy relationship with their parents and that's ok. I know my family and I know where the lines are. I choose to live away from them for too many reasons to get into, but one of them is for my own well being.

Distancing myself rather building is the easy way out when it comes to my family, but it's also the healthiest. I learned all I could from them and I have made those lessons my own to either continue building on them or stopping them completely. In many ways I'm fortunate enough to have both my parents still be alive and some what healthy. I have a lot of friends who grew up in single parent homes or who have lost them to the next world. I grew up with both of them, for better or for worse. I stopped romanticizing my relationship with them and my experiences growing up.

I stopped blaming them long ago as well, but that doesn't change what happened. I'm not expecting an answer or retribution for what happened. I have moved beyond that and made up my mind on where I'm going from there. It's a decision strictly for my own self preservation. It's not my responsibility to save anyone, not even my family. Doesn't mean that I don't care for them any less, after all, they're my family. I am who I am in part because of them.