The Hysteria Over Saving DACA 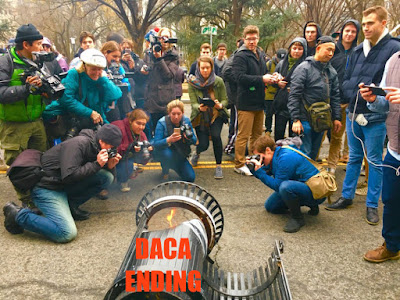 In times like these, I often question if there is something wrong with me. While the majority of folks are sharing vanity social media post about a decision that hasn't bee officially made or verified, I'm tuning out the world and going on about my day. I went through this once already through the build up the 2010 Federal Dream Act. Everyone making phone calls, having meetings, changing their social media profile pictures to be in support and news stories about what it would all mean if it passed and if it didn't. Back then, I was actively invested in the campaign. I was giving media interviews when I was asked, going to meetings, rallies, and generally helping get the word out. When the vote finally happened and everyone realized that the bill didn't get enough votes, everyone dealt with it and eventually regrouped to make DACA happen.

All these years later and now the day has come in which DACA "must be defended" because the program is going to be shut down by the current administration. Can't say that I didn't see this day coming, oh wait, yes I did. I watched the 90s X-Men animated cartoon on Saturday mornings. I saw the how the mutant registration program and Sentinals targeted mutants unjustly because they signed up for a program. I have analogies for days when it comes to making sense of what's going on, it's the reactions I've been seeing from those impacted, those in solidarity, and those who are new to this that has me doing double takes. Some of the rhetoric and narratives being used are by the books. Highlight that individuals with DACA are the best of the best, they contribute economically, are highly educated, they are Americans without papers. They deserve to keep their temporary work permits because the country would lose X amount of money. Oh and let's not forget that they're all innocent kids who were brought here as children and they themselves are still children. We have to think of the children.

No, much like other experiences, this has been one of the few times in which something old is new because of the way the internet and social media are used for and against it. It's like when Instagram first come out and old things became new and fun because you were reliving them through social media. These last few weeks have been the first time I've seen folks who I never imagined talking about saving daca, supporting those who have it, and saying how dump is a cruel person for doing it. Wanna be twitter celebrities who act the part and repeat the same talking points from media and non-profit organizations are getting play because we all live in bubbles and want to participate via Facebook activism. The nature of social media is to share something with out it being vetted, like a knee jerk reaction. All this does is cause panic through click-bait headlines that drive a narrative of fear and twitter threads of how bad things will be if daca is taken away from individuals. I can see the puppet strings, yet I can't do anything about it or rather, am I supposed to do something about it?

There is a tidal wave of misdirected support behind this current push to save daca that is lead by the usual suspects, immigration non-profits, local and national, who are taking credit for something they had nothing to do when it was barely getting off the ground but are now taking full ownership of it. A homie of mine broke that down in a Facebook post in response to everything that is happening and they're right. From daca being abused to exploit funding opportunities, branding, media exposure, and social media likes/followers, this has been nothing but a show on both sides of the fence. At the same time, whenever I see someone share their story or struggle, I wanna roll my eyes and tune out completely. It's nothing I haven't heard before and while I'm not the intended audience, I pause for a moment and tell myself that I shouldn't be dismissive of others fears and anguish. While I may have a different understanding and perspective of how things are playing out, that doesn't give me the right to dismiss others so easily. Getting sympathy from me is like getting ketchup out of a maple tree, so I just let the moment pass and do my best to respect others putting in work.

And more or less, that's how I get by these days. Instead of getting angry and sharing that anger on social media, it still happens once in a while though, I just tune it out and focus on what I have on my plate. I haven't talked to any media, but they don't call me up anymore. Whether it's because they've used me one too many times or because they have someone else who can give them the soundbites or click-bait headlines they need, I've been hands off. There have been times in which I come across a social media post and I wanna chime in with a history lesson about the immigrant rights movement, why the term dreamers is used, how daca came about, and how it all plays together but that isn't my responsibility. If there is one thing I have learned from the immigrant rights movement is that they will toss your ass to the curb one day and then pick you up to toss you underneath a bus the next.

The current narrative to save daca doesn't allow for those who are older and have history to be at the front of this push. Folks me like won't stick to talking points and use fear to garner sympathy from media, politicians, funders, and facebook activist. Folks like me will tell you that those with daca are classist and too assimilated for their own good. That losing daca means going back to doing the kind of work these young folks look down on with their parents. That they can't fathom a world in which their upward mobility is taken away and they have to go back to eating top ramen three times a day. I'm too old to be manipulated like that and because of that, what I have to say doesn't matter anymore. I'm just a hater and they're right. I'm not willfully ignorant, thank jebus, I speak my mind, and find a way to hustle from one day to the next. Daca or not, I'll keep moving forward one way or another.