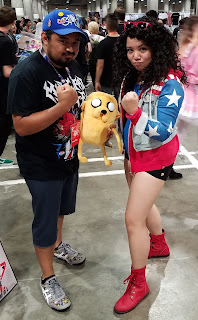 Nothing special this year. I realized that for the last five years, I was consistent about having a party at my house or at a friends house. Those parties have always been a blast and a great time to catch up with folks that I rarely get to see. Not to mention that alcohol and piñatas are always a guaranteed good time. I just wasn't feeling it this year, so I kept it low-key. It was just another Saturday to me. I went to work for the first half and then some shopping for back issues of some of my comic books. The special treat was being able to spend it with my girlfriend as well. All in all, I enjoyed being able to spend my time how I wanted. That's pretty much it. No existential pondering or questioning of things I'm currently going through or that are happening. Am I worried about losing my DACA work permit? Being deported? Losing everything I've worked for? Nah. I'm busy enough in my day to day routine and various responsibilities that I never give it much thought other than fully understanding that the end is important in all things. How and when is a different story for another blog post. For now, I'm grateful for everything I have going on and everything that is yet to come. This year has really been about putting in work on various levels, but at the same time, I feel stagnant as well.

For so long, my livelihood has depended on both my digital organizing and story telling that I can't see myself doing any other kind of work. Now I'm getting to the point of not wanting to be in front of a computer screen because of eye strain and because so much has changed as well. I've been able to keep up and adapt to keep myself relevant to whatever is going on, but this year I started shifting and loosing up on a few things as well. For the longest time, I had my own unwritten rule book about how things should be posted, when, how they should look, ways to maximize engagement, impressions, views etc. It's something I developed from my days in college and being a journalism major. I treated social media as an extension of journalism, so there had to be some basic structures and guidelines to things, other wise it would all be unusable randomness that couldn't be tracked or quantified. Said unwritten rules have helped me other the last 10 years, but things have changed so much now that I want to continue experimenting with new and traditional ways of getting information and stories out there.

I have ideas, but not enough time or resources to pull it off on my own. At the same time, if I start something, how far will I see it through? Quality takes time and energy and some days, I could care less. As fulfilling as it is, I don't want it turning into another item on my to do list that I need to grind through. At the same time though, there are so many new voices out there today that it becomes overwhelming. I remember a time when content creators of color were a rare and you had to go out of your way to find them and support them because many didn't last that long. Now I have a smorgasbord of content to chose from at any given time, but again, it's just overwhelming. If I wanna listen/watch discussions about a show, I first have to be caught up w said show to avoid spoilers & to be engaged in the discussion. Not to mention the endless possibilities that are possible thanks to the intersectionalities of our lives and everything in-between.

I think about all that and kinda wonder where I would fall in, you know. What do I bring to the table that will be of interest to others but also be sustainable. Facebook and Twitter have become my go to outlets for speaking my mind and sharing what I'm into at the moment. Not too long ago, I had a few blogs in which I could share what was going with me or around me in a more communal form. now, except for this one, I don't really have those outlets anymore. Like I said, way more voices are in the mix now and some get more play than others for one reason or another, it's the way of the world. I think back on those times and I was having a blast in spite of everything that was going on. I made it work and it helped me get where I am today and where am I today? Being a curmudgeon who wants to avoid large public gatherings, over rated restaurants, annoy people, and other consumer related habits that take over your life if you aren't careful.

Repetition and routine are most definitely the themes of 2017 and it's a good mix up from previous years. While at times, it feels like in a rut, I realize that even that in itself is a kind of blessing, but one I don't want to bask in for too long, lest I become bitter and a complete ass hole. Right now I'm just semi-bitter and a partial ass hole. We'll see how the rest of the year plays out and what it brings.