I have a bike now 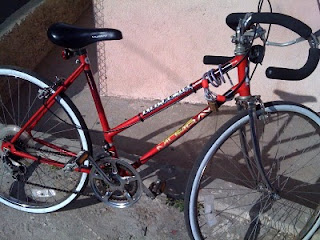 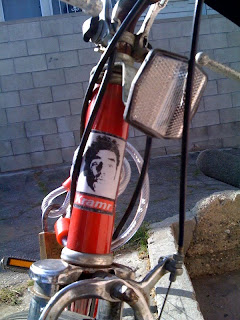 Course I had to put some stickers on it because I love putting stickers on things. That's why I dropped that Kramer sticker on the front. Who has a kramer sticker on their bike ? Yeah, that's keeping it real right there hahah. One thing a few people have also pointed out to me is that I have a womens bike. How can you tell ? Because of the frame. See how it pivots down and it doesn't go in a straight line ? Apparently that how it works. But what the hell do I care, I got a bike and a great one at that. I'm mostly going out in the evenings more than the day time cause it's way too hot and riding at night is serene. It's magical. 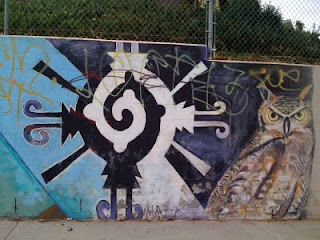 And I get to see a lot more cool things since I ride around the back streets a lot.
Writen by El Random Hero at 11:14 PM 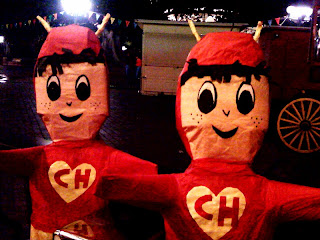 .
Full of grief I scream at the wind
I promised myself somewhere in the teenage life
I'd never submit to the ones I will not be like
Live in a hole
But stay close to my kind
Cause they understand what burns in my mind
I still feel incomplete
Friends are few and far between 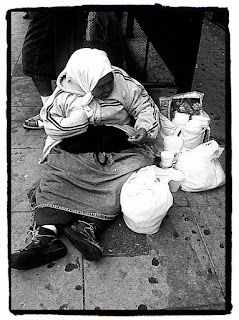 You ask me about that country whose details escape me
I don't remember its geography, nothing of its history
And should I visit it in my memory, it would be as I would a past lover
after years, for a night, no longer restless with passion, with no fear of regret
I have reached that age when one visits the heart merely as a courtesy....

In a way, I hate doing this, but if I don't say or do anything then I'm no better than the people who wrote that skit. I have LOVED Robot Chicken for years because it's a smart show that makes fun of everything in an intelligent and vulgar manner. Sometimes it's potty humor and other times its references to things, but when I saw this skit today, they crossed the line. You have to watch the above clip to know what the hell I'm talking about. I won't bother describing what's wrong with it because IT"S OBVIOUS. I laughed when RC made a parody called the 6 million peso man, because I knew it was making fun of the old 6 million dollar man tv show and playing on some stereotypes. We all can't be up tight about every joke because we have to be able to laugh at ourselves.

Part of me feels betrayed that one of my favorite shows would take such a cheap shot. I don't think I need to point out that people dying to cross the border isn't something that can be made fun of or joked about. They even got Hulk Hogan to be part of it too. The bar just keeps getting lower and lower. Thus I ask you, that if you read this blog post and think that skit if fucking bullshit, write to adult swim like I did and let them know. A few hundred people writing in about that should get them to notice why that skit is politically incorrect. I can take a joke better than anyone and I'm the first to laugh at myself, but death isn't a joke. Not when people risk their lives trying to have a better life. That's not a joke RB.
Writen by El Random Hero at 11:12 PM

In the span of three years, Ive gone from being a barely active person to hating too much to do at once. A few years ago I was more concerned with my journalism skills and reporting than anything else. Everything took a back seat to my reporting. Nowadays, it seems that I'm less of a reporter and more and more of an activist. Hell I'll even go one step beyond that and say that I'm out right becoming a community organizer, I've had the training and I do it on a regular basis with Dream Team Los Angeles. Buy I digress from the point of this post, which is in that youtube video up top. DTLA does a little bit of everything in terms of holding big actions like our coming out rally to going to class rooms and doing presentations about how undoc kids can continue on in college and universities. DTLA is barely gonna celebrate its one year anniversary and we're already taking the steps into turning it into a non-profit org.

It's been what ? Two weeks since I lasted posted something. I bet no one really noticed or anything, it's cool I understand. We all have our own lives going on. It's not like I was just sitting on my ass or anything either you know, which is why I'm going to fill you in on what the hell has been going on. I'd figure that those of you who read my stuff regularly are entitled to it, that and I just feel like writing. It's a bug inside my head because even though I've been without regular internet access for two weeks, life still happens and I still write shit down, except the stuff I wrote in those two weeks is already past the initial moment so eh. 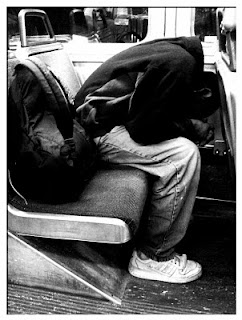 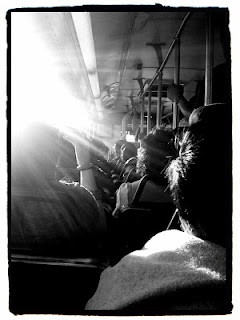 I love having conversations. The exchange of ideas and thoughts is so
powerful, whether it's done to share an experience, tell a story or
just getting to know someone. I can't remember if I mentioned this
here, but on Monday Feb 22 I put together a panel discussion of four
students, including myself, to talk about identity with undocumented
students and individuals.

I called it phantom identity because it's an identity that can change
for the better or the worse and in the end, it will almost disappear
when we become legalized. It was a great event and people loved it.
So, today I was talking to a friend who was there, but left early.
They wanted to share their thoughts about it with me since we had some
time together.

In a nutshell, they explained how the identity of anyone undocumented
is almost the same as Mexican American Chicanos/as. The isolation,
feelings of not belonging, having to keep it a secret all that stuff
that anyone undocumented deals with. Stuff I deal with. I told them
that I completely agree with their view and personally have used that
model to learn who I am as a person.

However it's different with undocumented people because not everyone
is of Mexican decent, so it varies with individuals and how they see
themselves. But this paradox of identifying as a Chicano/a is
something I've have on my mind lately. In my Chicano/a Studies history
class, I realized that as a native Mexican I'm learning about my
history not only in English, but from non-native Mexicans. Huh ?

It tripped me out there for a second, you know, kind of like when a
dog makes a confused face. Yet, this identity thing also ties to that
of African Americans or anyone of color because we will never be fully
accepted into the main stream white culture. Whatever that is. I
myself identify
more with super heroes but that's because I'm a nerd.