BlindSpot: A "DREAMER" in a Main Stream Comic Book 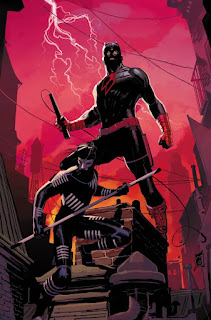 When I first read about comic book writer Charles Soule introducing a new character, who is also an undocumented immigrant, to his Daredevil run, I basically flipped my script. At the time of the announcement, there weren't any details available on the new character or the DD book aside from this being a new partnership that will take place after the comic universe reboot brought on by Secret Wars. I waited for more details and for the eventual release of the book, which is currently at issue 9 as of me writing this. After that, I also waited for the first arc to wrap up before I wrote anything about it, so join me in this rare opportunity in which I can nerd out on comic books, identity, immigration, politics, representation, and what it means for a "dreamer" to be featured in a mainstream stream comic book.

Before you continue reading, there is some housekeeping I have to mention right off the top. This will help if you've never come across my blog before or if you need some points of reference on where I stand on the identity politics of "dreamers", my love for comic books, and past blog post in which I've used comic book characters to interpret my own life experiences. For the purpose of this post, I'll be doing something I normally wouldn't do, which is to refer to said character as a 'dreamer', mostly because this is the archetype being used and how the writer is describing him. The politics of that identity will be left out for the purpose of this post. I'll also be hyperlinking past post throughout this one, rather than listing everything as a list. The "dreamer" identity can be complicated for a lot of reasons, but for me, it is now a reminder of what was. That being said, let's nerd the fuck out yo.