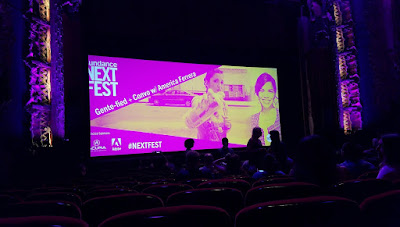 This show has been on my radar ever since I first heard about it. Over the weekend, I was able to see the entire seven episodes of the series and listen to a Q and A discussion with America Ferrera and ‭Aaliyah Williams, who were executive producers, director/creator/co-writer ‭Marvin Lemus, co-writer Linda ‭Chavez, Josefina López of Real Women Have Curves and the homie Nancy Meza repping Defend Boyle Heights. The screening was the first time the entire seven episodes of the show were shown in public, with three previously being screened at Sundance. I myself didn't do any research about who was putting it on, the director, the writer, actors etc. because I wanted to go in there cold and just take it for what it's worth. When I initially bought the tickets to go see it, I was expecting it to be a traditional q/a shesh between those who worked on it, so it was a nice surprise to find out Nancy was going to be part of the discussion the day of. That being said before I start getting into the meat of things, take this as your semi-spoiler warning for the show. They themselves don't know when the full seven episodes will be shown publicly again or where, so if you want to see them without any of the contexts I'm going to get into and brief descriptions of the episodes, click here instead and read this after you've seen the show.