It's been what ? Two weeks since I lasted posted something. I bet no one really noticed or anything, it's cool I understand. We all have our own lives going on. It's not like I was just sitting on my ass or anything either you know, which is why I'm going to fill you in on what the hell has been going on. I'd figure that those of you who read my stuff regularly are entitled to it, that and I just feel like writing. It's a bug inside my head because even though I've been without regular internet access for two weeks, life still happens and I still write shit down, except the stuff I wrote in those two weeks is already past the initial moment so eh. 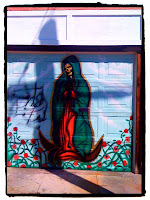 Well first of all my familia moved, hence the no internet part.I got my own room and I pondered on the last time I had my own room, which was when I was 9 years old. From then on, I've always shared rooms with a sister. I've moved a ton of times so this was nothing new for us. It's sad that we're us to it. Any who, during the move I realized how mentally unbalanced my dad really is, which fills in the holes on things and it's actually a legit thing, not just some notion that my dad is crazy. He's fucked up in the head, but that's a future post. Anyway, I have my own room. Good stuff. 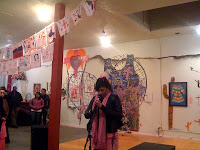 I read some of my stuff in public for an art exhibit on the Mujeres de Juarez. Initially I was going to read some poetry, but instead I shared my experience helping a woman who was being beat up on by her partner way back in 2007. It was an amazing show and I felt the most intense energy at the show. Everyone came out to support, but more than anything, everyone kind of came to pay their respects for what's going on because that's how fucked up the world is right now. 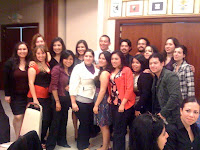 I also happened to get a scholarship from Adelante California. Like any scholarship that I am given, it is a HUGE blessing and I am forever thankful for not only their support, but for believing in my. More than anything, just having a group of people say that they believe in what I do and what I'm doing at school, that I will make thing happen and I share their passion to give back and pay it forward. The dinner was amazing because I saw soo many friends and at the same time, it was cool/weird that I was receiving a scholarship with soo many friends at the same time. Hence the picture. I have a lot of people believing in me and I won't let anyone down. That you can bet on.