Your Version of the Movement vs My Version

My last blog post, in which I shared my thoughts on the hysteria of saving DACA, got more attention than I could have ever predicted. Keep in mind that when I share something in this space, I'm mostly doing it for myself. To think out loud. I've been doing it for so long that at this point it is just a natural instinct to write about what's on my mind. As you can see by this screen grab, that daca post became the most read blog post ever. And that's saying a lot considering that I posted it in September. 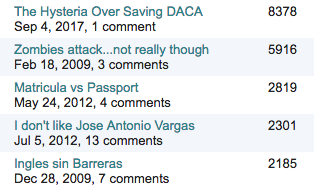 After posting what I wrote on social media, I saw it get some traction here and there, nothing out of the ordinary. Just folks sharing their thoughts and me sharing mine. In-between all that though, I noticed that other people started commenting in other individuals post, mostly wondering why I'm such a salty hater and why I didn't provide more context in the post itself. First of all, I ain't writing no thesis, if you've read my stuff before or know me personally, nothing I write really needs explaining. Unless I'm being unusually cryptic and hungry for attention via social media. Second, it reminded me of how big the gaps are in how little others know about that undocumented youth movement, past, and present. And to an extent, the immigrant rights movement. Everyone is used to having everything handed to them or asked to react to something without real context or history. If it isn't a click-bait headline that further pushes a narrative of fear, good immigrants, and capitalism, then no one wants to hear it. Then I started reading comments in social media post after folks protested Nancy Pelosi at her press conference. 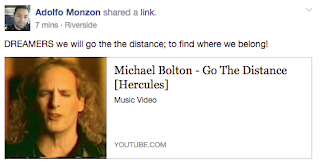 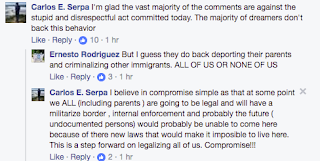 In-between all that noise, I remembered the opening of the PBS documentary The Black Panthers: Vanguard of the Revolution and the analogy shared at the start.The analogy of four blind men all describing an elephant from their point of view is one that is old and has taken on different forms as it's been retold, but the meaning hasn't changed at all. I looked up the clip on youtube and I said to myself, holy schnikes! There it is. All the years of arguing with who did what where and why things happened the way they did, it all makes sense now because I never considered others experiences, nor do I care to really. I checked out of that movement long ago and now I only pop my head in every once in a while to talk shit cause I'm petty like that.

None the less, that analogy about the blind men and the elephant helped me center myself and stand back for a moment. With all the hysteria going around, the fear created by uncertainty, and what the next few months will bring got everyone rattled in some shape or form. This kind of desperation is what is reflected in all those comments on social media. The fear that what little folks have been given will be taken away, yet the majority of those same folks don't know what it took to get there or the years of movement building behind it. Then those same voices are augmented by trash reporters looking to write stories that perpetuate the same fear narratives and do nothing to move things forward. It's a cycle and one I am extremely familiar with because I worked in the past. At this point, I'm done with it. It isn't my responsibility to hold peoples feet to the fire when it comes to history lessons or who gets to speak on television. All I have is my experience in the movement and my recollections of whose an ass hole and who isn't.

For now, things have calmed down for the better part. The October 5th deadline has passed and now everyone is holding their breath that something positive will happen come March. Then the cycle will start all over again and that's fine. Folks have every right to be scared and taken advantage of by non-profit organizations who also proliferate problematic narratives that center them over those directly impacted in the name of funding. The world will continue moving forward and the worst day of your life is going to be just another Tuesday for me.