If I'm honest with myself, I've been feeling like this way longer than I realize. The ebb and flow of everyday life, along with in-between surprises, keep me from dwelling too long on that feeling. Thus, I carry on. THere are days in which I feel utterly defeated and others in which I question my motivation to continue doing what I do. Now more than ever, I have never felt stuck in an endless routine that did nothing to nurture my growth as an individual. My actions having no meaning other than just helping pass the time till the next day came. This has also lead to me being in the worst shape and health of my adult life. Realizing how far I have let myself go was hard to swallow, but it also pointed to my lifeless routine the last couple of months. Drive to work. Sit at the computer. Drive home. Sit at the computer at home. Go to sleep. Repeat. It's so easy to fall into this rut that I feel helpless at times to do anything about it because I know I will eventually fall back into it. It's easy, it's comforting, and sometimes it's the only way I'll get any sleep.

The shit going on that I have no control over also has a role in all this. Everything from what will be the final decision on DACA and how that'll impact the future one way or another and what I'll have to do in response to that. Police violence, gentrification, the skewing of laws and policies that will criminalize the poor and lock them out of basic services like affordable internet service to long-term impacts all this will have after the current muther fucker in the white house is gone. It also doesn't help when those who are fighting back against these changes use a star wars reference as the name of their movement either, but whatever. I've been around social justice movements long enough now to know who to trust and who to work with in making thing happen.

At the end of the day though, I don't know where I'm going anymore. Changing things up in terms of employment and where I want to go has been on my mind for more than a year now and while there have been opportunities, things just didn't fall into place. So I stay where I'm at and continue to put in work because even though I've grown as much as I've can where I'm at, I still believe in the work and those I do it with. Which then leads me to ponder on the future of my work and how I do it, through media and social networks. Thus far, I've been able to adapt as needed and grow alongside how stories are told in our society today. I may not be the best at it or doing it for the biggest organization, but I do it with more integrity than others. While the way in which information is exchanged keeps changing, the foundation I have built for myself still holds up to this day. This usually means learning new tricks here and there, honing them in with practice and the support of friends. Still, at the end of the day, all you are doing is telling a story, something I will never tire of doing. 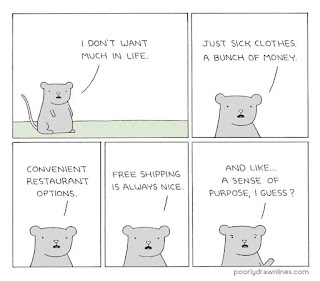 Another side to all this is age and time. Most folks I know are stuck in a bubble of accomplishing social norms and personal goals that I have distanced myself from them for one reason or another. Other than ensuring that I have a roof over my head, clothes on my back, and food in my stomach I have no real pressures from said social norms or any kind of personal goals to speak of. That is to say that I wouldn't want to have permanent stability in life that would give me the freedom to set some and go after them, but I fail to see the point. Sure, I have aspirations of traveling to different countries and cities, buying a house and stuff like that, but longing for such things has mostly lead to me being resentful, frustrated, and angry about things in which I have no control over but somehow they have control over me. At this point in my life, there is very little that I want or long for. For better or for worse, learning to detach myself from those kinds of ambitions, has led me to find comfort and peace in simplicity.

What's most frustrating of all is knowing that I don't have the leeway to shift things around myself. This may be self-imposed or something else that goes unnamed, but priority one has and will be ensuring I can take care of myself. I've slept on too many floors and crashed too many couches to lose everything I have built up to this point. That fear is what pretty much keeps me going 80 percent of the time now. It usually leaves me feeling empty inside until I can somewhat recharge my batteries by doing something I wholeheartedly enjoy. Then the cycle repeats itself. I won't last much longer if I keep going like this, but at the same time I have no definitive answer or alternative to work toward that will help me change things. It's easy to be complacent until I'm forced to change things one way or another. Last time that happened, I got hella lucky and managed to bounce back after spending two weeks in complete fear of losing everything I worked for.

I dunno what I'm going to do with my life, but I'll do enough so as to not get fired.