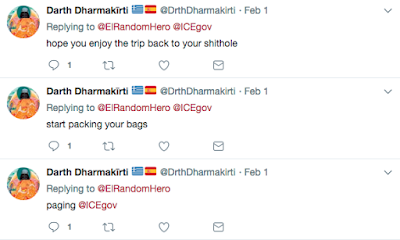 In all my years of being out and loud about being undocumented, I never got much pushback from xenophobes or haters online til as of late. As you can see from the screen grabs up top, they all somehow started coming across my twitter account. Regardless of the how or why they're all emboldened to try and step up to me by tagging the ICE twitter account. I myself ponder on that because I know other folks who are magnets for hater social media accounts, granted they have higher public profiles than I do. I mean, I don't doubt I would get the same kind of attention if I was a guest commentator on CNN or something along the lines of that. But even then, if I did, I'm so beyond it that it would be more of an annoyance than anything else. It would dampen my use of social media because I would have to filter through all the trash to get to what I want to see in my feed and mentions. 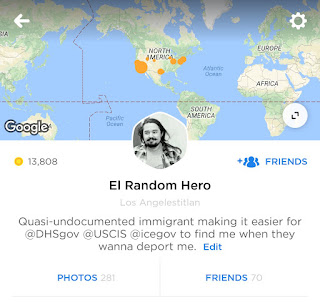 Funny thing about all this is that this has been my bio on the location app Swarm/FourSquare since I got it in 2012. The irony of being extra public about my location through social media didn't escape me, so I ran with it and turned it into a joke. I go in waves of when using the app because it's annoying to pull out my phone and tell everyone what I'm doing and where I'm doing it multiple times a day. Especially since not a lot of folks are active on it, so it turns into a bubble. But I brought it back since all these randos started coming to me just to fuck with them.

Still, in chewing on the fat of the situation and knowing that they were trying to scare and intimidate me because of my status, I was reminded that this is the norm on social media now. Last year, people got all freaked out because haters on 4chan were looking for folks through the hashtag undocumented and unafraid and report them to ICE one way or another. It was hot for a minute but then it all died down and it seems like most folks forgot it even happened. To me, that was a wasted opportunity for education and engagement on being secure about your digital habits. It's no different than being on the bus and not busting out your laptop or leaving things in plain sight in your car. Digital security is an afterthought for the majority of folks because every once in a while, I'll get a spam email from an old account that got hacked. It's not till something dramatic happens that folks become aware of the issue of security.

I myself have stepped up my habits and measures over the years. Nothing dramatic, but just like you wouldn't use expensive tech on the bus carelessly, I apply that same logic to my digital life. It's not going to stop someone if their sole intention is to dox me, but at least I know there are some extra steps they'll have to go through before getting full access. Steps that would hopefully tip me off in time to fight back. But the thing about me is that I'm in this field of work, most folks aren't and depending on where you live, there might not be any support networks available to you. That plays into the digital and real life intimidation that has increased since shit hole got into office.

If you live in a major city, you obviously have more resources and can get some help, but if you're out in the boonies of the mid-west or a rural community, the threats become that much more real for everyone. Even access to basic services is an issue for most folks in those situations so I can understand how online security can be on the bottom of their list, but it's not like they're out there on an island, closed off. Being able to look for resources and guides online from trusted sources can put them in the right direction. Being informed and understanding your rights can make a world of difference. It won't stop direct abuse from authorities looking to fuck with you, but you won't make it easy on them either, thereby creating a window of time in which something can hopefully be done to alleviate the situation.

Having said all this, the best thing I can do is list a bunch of resources for folks to go through and hopefully take away some practices they can incorporate into their digital life, but meh. I'll let folks learn in their own time at their own expense.
Writen by El Random Hero at 11:35 PM