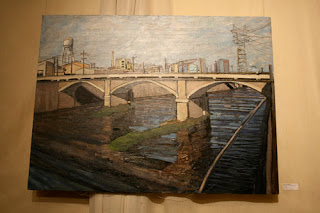 A friend of a friend knew a friend who knew a friend. That's the basis of how the one night exhibition of paintings, prints, photography and animated films by Cesar Gonzalez, Manuel Lopez, Alexander Schaefer, Andrea LaHue, Rick Mendoza, Javier Barboza and numerous others was put together at Gallery 1919 in East L.A.
What amazed me more about this event; besides the great tunes and free drinks were the people behind the show. 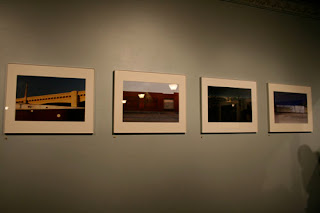 Maria Elena is a student in her 20's who, with the help of her friend’s friends and their friends, put this exhibition together. After meeting up with her at the show, she clarified that the idea to put on the show was to give her boyfriend, Manuel Lopez a place to show case his works. 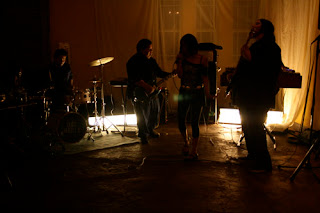 From that simple idea she started calling friends and other artist she knew if they would like to be part of the show and contribute in anyway possible. Elena thus began her arduous venture in figuring out how to produce the show, considering this was her first time. Having visited various galleries and the Downtown art on occasions, Elena had an idea of what she wanted to do with her show and followed her instincts. "I didn't want it to feel like an 'art show'," said Elena and to her credit it didn't feel like an art show. 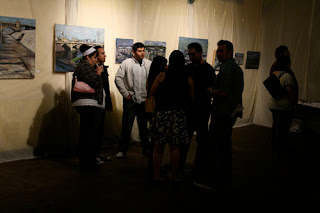 The vibe of the show was a laid back one. There were no pretentious hipsters taking up space filling up the room with smoke or "art critics" that I could recognize. All there was, were good people hanging out having a good time, enjoying a drink with friends, almost like a gig. The other feeling that I got from the show was that in a way, it felt young and full of energy. On this particular night I went to work earlier in the day and straight after work I was attended a reception for the Vincent Price Gallery at my school EAST L.A. College. That vibe and mood at that show was calmer and slower given that the crowd in attendance was composed of teachers, students and friends and family of the featured artist. I will admit that they had great food, I'll give them that much. Yet as soon as I arrived to the show I felt re-energized. I didn't feel like I was standing up all day at work ready to call it a night. I felt as if I could party all night long, especially with local bands "Das Radio" and "The Sirens" playing through out the night. 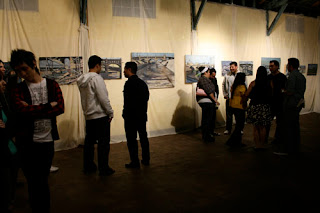 The show also had Jim Marquez as a special guest. Marquez has a few published books and is a regular columnist for the free publication Citizen L.A. Marquez, who is no stranger to EAST L.A., read a few excerpts from one of his books. It was a rare opportunity to hear an author read their own work as Marquez had the few people in the room mesmerized. The event ran late into the night was a success as Elena was "proud of the work [my friends and I] put into this show." 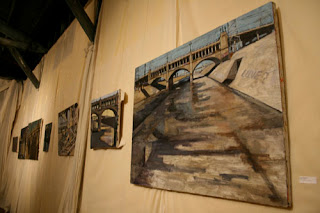