Superman and his Immigration Status 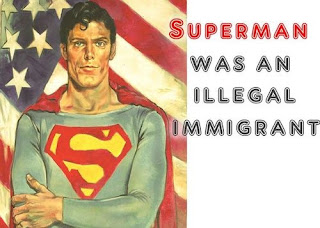 It’s easy to see how and why Superman can be considered an undocumented immigrant. His origins mirror those of anyone forced to relocate from their home country to another because of outside factors and in Sup’s case, a dying planet. For decades, he’s embodied the spirit of America by upholding truth, justice and the American way, reflecting the origins his original creators had in mind and those placed on him by society throughout the years.

And while the details of who Superman is and how he got to earth have wavered, the fact remains that he is from another planet and he grew up in the United States, just like me. That is, if you consider Mexico another planet. I’ve lived in the US for 21 years as an undocumented immigrant and assimilated to the point of surpassing numerous negative stereotypes and low expectations placed on Latin American immigrants by US culture and society.

Like Superman, my views on society have grown and changed over time to see the inherit connection between all people of the world. Politics, policies and/or wars know no borders when it comes to creating situations in which individuals have no other choice but to migrate for a better life. When parents are faced with the choice between death and a better life, they’ll do whatever is needed to protect their children. Just as Superman’s parents did with him and my parents did with my siblings and me.

That’s why it didn’t come as a surprise to me when Superman renounced his US Citizenship a few years ago in issue 900 of Action Comics. His actions anywhere in the world are construed as extensions of the US and its politics. And just as things around the world have changed in time, Superman has always been able to reflect those changes in his character. `Truth, justice and the American way’ – it’s not enough anymore.”

The Superman of my generation is one who is conscious of his actions and strives for inclusivity of all people, not just immigrants. He acknowledges that injustices are committed all over the world, and that no one person’s/groups struggle is greater than another’s. By saying that the US is a nation of immigrants, we exclude and push away our black, African and indigenous brothers and sisters who are also in the same fight for social justice and equality.

While both Superman and I both share the experience of growing up as outsiders and assimilating in a society whose identity is built upon both accepting immigrants and being suspicious of them, we’ve both come to acknowledge the globalization of our current society when it comes to fighting issues of social justice. To be in solidarity with all of those fighting for what is right, whether it is immigration, police brutality, racism, homophobia etc.

(I wrote this up as a submission for another project, so I held back. I'm going to follow up on this again with added details that I omitted for this piece to follow guidelines)
Writen by El Random Hero at 4:39 PM