Not About That Life 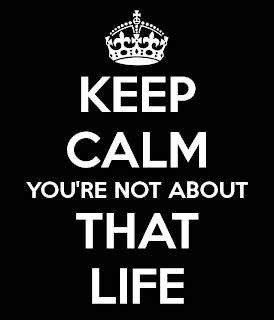 You know, the last time I found myself caught in an existential transition that revolved around life milestones I was graduating high school. Everyone around me had some sort of plan on how they were going to move forward as one part of their lives ended and another started. Me, I had no plans. I just worked whatever jobs until I started going to community college. I’ve never planned ahead for anything because frankly, I never thought I would be alive this long to find myself in these kind of existential situations.

Part of it is that I gave up on myself when I was seven years old. I treated school and life like I job I hated, but had to go to. I went through the notions and did enough work so as to not be “fired.” And the Los Angeles Unified School District had no problem letting me go through the motions until I was no longer their concern.

I wanna say that part of it also involves my parents, but that’s just a cheap cop out. They fed me, put clothes on my back and a roof over my head. Anything after that is just being nit picky. But I don’t deny that my particular experience growing up and my relationship with my parents, or lack there of, does have its place in all this.

These days, I’m finding myself in what seems to be another inescapable universal experience of life milestones that alienate me. Friends and peers are getting married, having babies, buying house and settling down. The transition of going into your 30’s and building the foundation that will hold up the rest of your life seems to be upon me or at the very least, around me.

I’m happy that folks are finding happiness with significant others, starting families and moving forward in the world. And it never occurred to me what was going on until I suddenly found myself without anyone to hang out with anymore. All of a sudden no one wants to go on drunken bike rides, dancing all night, to museums, or anything remotely fun.

The week is spent at work and the weekend is reserved for family and partners. There’s no time to hang out with friends anymore unless it’s in a group setting or some special occasion that brings everyone together, like a birthday party or something. I realized this and though how lame it was. And then I started thinking about it some more and I realized that it’s just that time.

These universal life milestone transitions happen to everyone, and given my point of view and life style, I find it rather peculiar how my peers and friends are comfortably settling into these transitions. But then again, it’s what they have been working toward for years and it’s now that they’re benefiting from all that hard work.

As such, I’ve pretty much written off everyone I know, with the exception of a few folks here and there. Much to my chagrin, everything around me is moving like clockwork and I’m not about that life. I never have and never will. Yet, because I’m around it, I can’t help get caught up in the current of it all and as such, the currents flush out contradictory feelings and thoughts that I have to address.

In my entire life, I’ve never had anything that could be deemed “normal” in any sense of that word. My relationship with my family, the way I had to live, the manner in which I’ve experienced universal milestone transitions and the formulation of my own identity. At best, all I have is a set of acquired survival skills that have allowed me to get where I am, but they can only take me so far. I’m lucky enough that these days I find myself in a non-survival situation and I’m beginning to flourish in some ways.

More than anything, the changing currents around me are helping me to look within myself and be critical of my beliefs and the direction I may or may not want to continue following or go in. I have the unique privilege of not being committed to anyone. I could pick and disappear at my beckoning and things would be the same for me wherever I end up.

Because I didn’t grow up with any kind of resemblance to what society considers “normal,” it shouldn’t be a surprise that my adult life will be the same way. But I’ll tell you what, it still doesn’t make it any easier to fight and in some ways, deny the almost pre-programed feelings, notions and ideals that are implanted in everyone. This need to partner up with someone, to build a life together and play it all out until the end comes.

On the days in which I just sit at home and read, watch movies or go on bike rides by myself, I don’t deny a feeling of loneliness. I can do things by myself, but I enjoy sharing them a lot more. But as it stands, no one has time for that kind of stuff anymore, least not with someone who isn’t a significant person in his or her lives. It’s a change that needs a constant conscious effort to keep up and rationalize.

I grew up isolated. I was always changing schools, if I ever made friends, eventually I would have to say goodbye to them because I knew I would never see them again. When I started getting involved in DREAM Act work, I latched on to the new found activist family that helped me grow as an individual. But even those friendships dried up and changed. At best, they were more circumstantial with the exception of a few folks here and there.

It’s funny that in all of my favorite comics, cartoons, books and what have you; I always gravitate toward the anti-hero. The lone wolf. That one character that separates his or herself from everyone else because they have some hang up that they turn into a personal quest of some sort. A Batman or Wolverine complex if you will. And now as I see life transitioning around me once again, I’m able to acknowledge it for what it is, appreciate it and celebrate the blessings folks are receiving. But it also means that I have to find the strength and endurance to hold my own. To continue growing as an individual and learning to be independent all over again.

The world will continue changing around me nothing can stop that. That’s why it’s important for me to be steadfast in what I believe in and stay true to myself and no one else. The time will come when that’ll have to change because I will be sharing my life with someone else, but that wont be happening anytime soon. All I can do is me and nothing else because I’m not about that life. The life I’m about has yet to be defined because I haven’t live it yet.