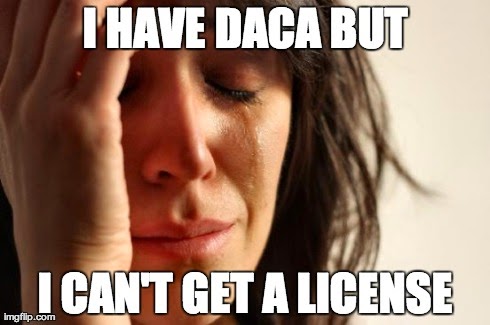 The privilege of being able to get a drivers license and being able to drive a vehicle, the quintessence of being a teenager and taking those first steps of independence. If you had talked to me a few years ago, I would have been griping like the kids in this Latino USA piece, one of my favorite podcast, on not having the privilege to drive legally. Hell, I’ve had a DACA work permit for a little more than a year and I still haven’t bothered getting my drivers license, but that speaks to my privileges, living in a metropolitan city like Los Angeles and being able to ride my bike everywhere.

None the less, that’s what it all comes down to, privilege. For as long as I can remember, status has been tied to car ownership. Whether it was delivered through pop-culture or through my own immediate and extended family, you weren’t shit if you didn’t have a car. Like something outta Scarface, you know: first you get the green card, then you get the license, then you get the car, then you get the women. I imagine for women it’s similar, but instead of getting other women, they get-to-get away from douchebag guys and no longer rely on others for rides. It’s different for everyone.

There’s no comparison to living in a place like Nebraska, where distance to places isn’t measured in blocks, but by miles. The public transportation, if any at all, is just atrocious. I got free sample of this kind of semi-bucolic living when I spent two months living in a small town in Utah. The fact that I peaced out after two months says it all. I ain’t cut out for the snow, nor driving everywhere. But since the cost of living is cheaper there, it’s no wonder the majority of my family lives out there.

Hoping that y’all have listened to the Latino USA piece before getting into this blog post, if you haven’t listen now and then start reading where you left off, I felt inclined to share a different side of the coin when talking about not being able to drive while undocumented. Cause journalist and media sensationalize things with the crying, and the “ohh let’s feel bad for THOSE PEOPLE, ohh no POOR THEM” shtick. Bah I say.

Does it suck that while folks were able to get a temporary work permit through DACA, their home state bars them from getting a drivers license? Yeah. Is it unjust for states like Utah to give marked licenses to anyone who gets one without providing proof of a social security number or legal status in the US? You damn straight it is. Police sobriety checkpoints used to impound family cars, giving tickets that’ll mean eating or going to jail. With or without a license, folks are going to be extorted by those that use and abuse the system.

I grew up having to explain to officers that my uncle was driving without a license because my father got too drunk to drive himself. Trying to make the choice between feeding the car or feeding the family came up one too many times. Fact of the matter is that owning a vehicle means that one has to make enough money to maintain it. Suddenly it stops being about immigration status and it turns into class status. You can be undocumented and own a car, you just won’t be able to keep it if the police pull you over for driving without a DL.

Then there’s that rhetoric of wanting to be “normal,” when even just having a two-year work permit is more than what others will ever get. Poor me, I have upward mobility, yet I’m hindered by not being able to attaint benchmarks of assimilation and success as defined by this countries social standards. Driving without a license is for those other immigrants that don’t know how to speak, read or write English. As if.

“Dreamers” today aren’t as resourceful as others were. The mini-documentary (Seattle underground Railroad) Tam Tran made of her and friends going to Washington State to get licenses, chronicling that experience showed what lengths folks went to for drivers licenses. Fact, some got mad cause the video was scorching paths other still needed to use.

I come from a community in which even having the ability to get a license means nothing because no one can afford to drive. There’s only one family car, and that’s the one that’s used to get to and from work. Being poor meant you relied n public transportation and walking. Lots of walking. I’m proud to have come up that way because of lessons I learned getting lost, interacting with others on the bus, and learning how to get around on your own.

Then there are those who can’t even afford the bus. Jornaleros (day laborers) rely on riding their bikes to get from one job to another. Some are in hard spots because they’re borderline homeless and they’re just scrapping by anyway they can. I’ve had the opportunity to meet and work with men in those situations and it’s intense. For all my privileges, I choose my bicycle and public transportation as my means of traveling. I’ll eventually get that drivers license, but being an accidental environmentalist has also shown me alternatives that shouldn’t be ignored or dismissed.

Yet, at the end of the day, it’s all frivolous. You got this group of kids with DACA crying that they can’t get to school or work because they can’t get a license in their state. Then you got others who don’t even have DACA and are barred from higher education in their home state. Then you have those who have anything at all, and I don’t say that to be a dick, it’s just how oppression Olympics work. So stop crying and figure something out. That's what being undocumented is all about.