The Co$t of Being Undocumented 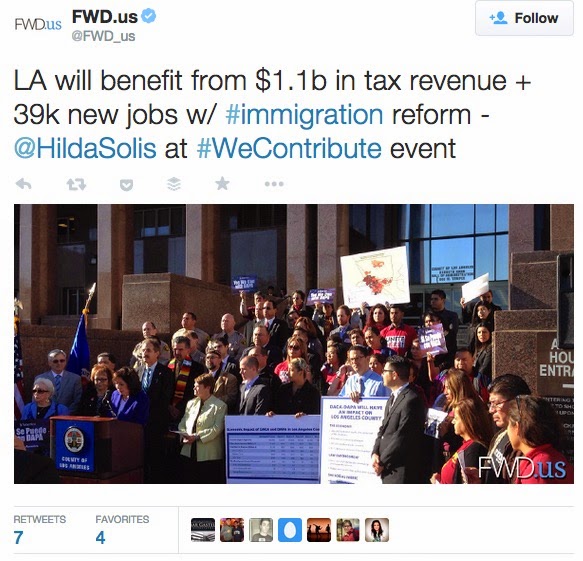 As I get ready to do my taxes for 2014 and after having just sent in my renewal for Deferred Action, being a semi-legal resident is expensive. I say this not because I just realized it or because I'm getting hella taxed by the government, but because for as long as I can remember, money has been an issue advocates have used under reasons why immigrants should have a legal status in the US. Earlier this week, I found myself at a press conference for something that is happening here in Los Angeles. While the federal government deals with the situation in Texas that is stopping the roll out of DAPA and the DACA extension, the city is allocating money to help folks here in LA in signing up for DACA and DAPA. As seen from the tweet FWD.US posted, the city stands to collect a projected one billion dollars from individuals that qualify and get approved for DACA and DAPA.

Ohh sure, there are humanitarian reasons for providing services to immigrants, but it is all about the money. At said press conference, I asked myself if I was being a grumpy cat or a realist? A few years ago, I would have been all about this kinda stuff, but with a blind eye. For a lot of years, I stood behind and advocated for policies and programs that are hella fucked up when you stop to think about them critically. Thankfully, I know different now.

However, don't get it twisted. As an individual who is flourishing from the little support DACA provides, I accept the deal without any qualms. I fully acknowledge the numerous privileges tied to DACA, my age, my gender identity, my skills that pay the bills etc. For others, DACA is the greatest thing to have ever happened to them. I am not one of those people. My struggles are my own and while I have trouble finding sympathy for others these days, I don't speak for them.

I realize and acknowledge that the government isn't doing us any favors by granting us temporary status'. The desperation and need for them are sorely needed, but it really is no different that showing a photograph of oxygen to a drowning man. Everyone has to make peace with that. I question those who don't because ignorance and denial are just as bad. Thanks to my non-profit job and side hustles, I can afford to be a temporary resident, others can't and I remember that everyday.

I think about that when I'm buying comic books, eating out, going to the movies, buying random crap online that I don't need, $90 sneakers, craft beer, video game systems, $500 smart phones, art, books, food etc. I think about all that and I don't bat an eye. Experiencing the depths of grief helped me appreciate the heights of joy and brother lemme tell you, things are fucking joyous around these here parts.

So what's the point I'm trying to make? Own your shit. Don't be coming round here touting some humanitarian rhetoric on how you are going to help all THESE IMMIGRANTS with what you are doing. Just straight up say, yo! We need to get all these immigrants temporary work permits cause they is going to be paying a shit load of taxes and not seeing any of it back. Straight up, they're going to be throwing money into the economy, social security, and everything else in between. We all gonna be rolling deep son, naw mean?
Writen by El Random Hero at 10:27 PM