I Didn't Think I'd Get This Far 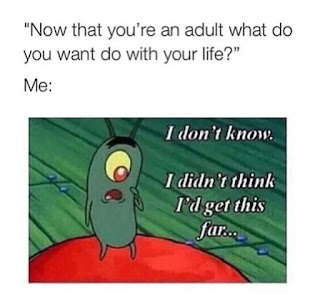 When I graduated high school, I was depressed because I didn't see a future I liked. The reality of no longer being in school and having to figure out what I was going to do for the rest of my life was depressing because I wasn't able to see beyond being undocumented and all the hardships that come with it. In those years, I was doing manual labor and helping out in the family business, which varied on whatever get rich quick scheme my dad was trying to pull off at the time. Eventually, I enrolled in community college, found better employment opportunities, started becoming politically engaged, and I began walking down the road that I find myself on today. For everything I have built up and accomplished since then, the future isn't something I give much thought to. DACA has made it easier to take advantage of opportunities that would have been blocked off otherwise. Yet, I still don't really plan beyond the two years this work permit grants me. In the back of my mind, I contemplate on whether this will be the last time I get approved and what I would need to do if I don't get renewed.

As I've pointed out in previous blog post, I'm at that age in which transition is all around me and while I usually don't give it a second thought, it gets overwhelming at times thanks to being hyper-connected on social media. I smile and nod till the moment passes, but recently, there cracks in holding back my existential thoughts have been getting bigger. I spend a lot of energy holding back because my attention is needed elsewhere, but alas, I find myself at another existential crossroad in which uncertainty follows me at every turn.

This current lapse in self-confidence was brought on by something I wasn't expecting that related directly to my future employment options and what I wanted out of them. It was like something out of Office Space. I like my current employment situation, mostly because I'm employed. When it's slow, I'm working two part-time jobs and when I'm busy, that usually turns into three or four. I'm able to balance everything out on a regular basis, but there are times in which everything is happening at once and I go into overdrive mode. I just came off one of those this month and it gets harder and harder each time. It makes me question if it's worthwhile to continue taking on multiple gigs at once and the work that I do. It literally feels like withdrawals at times.

It's hard for me to think about the future because I never planned on being here in the first place. And by here, I mean that in both the literal and existential kind of ways. At best, I can keep my depression at bay by keeping myself busy with work, extra projects or just doing things I enjoy. At worst, it bogs me down to the point of me not being motivated to do anything and just wallow in pity while still going through my everyday motions. My current work in communications wasn't planned because it didn't exist. I grew along side it through some major growing pains and because of the journalism skills I picked up while in community college. That lead me to the immigrant rights movement and that lead me to bicycle advocacy. The mishmash of skills I've accumulated over the years have helped me get to where I am today, but now I question if I reached my limits or am I content with how things are. In the job of life, am I just working hard enough so as to not be fired?

More than anything, I feel like I'm stuck in a rut. For all the growth I've made in these last few years, both professionally and personally, I come up short when I being to think of where I want to go next. At the same time, I feel like I'm starting to get left behind because of my hybrid set of skills. I remember when no one really took digital organizing and communications seriously. Now everyone and their mom thinks they're an expert because they know how to use social media. It just makes it harder to stand out when there's so much static noise. It also makes me question whether I should finish college, but the thought of paying for something that I hate fills me with rage and disgust.

That being said, it keeps getting harder and harder to find the motivation to do what I do where I do it. There are days in which I wouldn't wanna be anywhere else and days in which I was anywhere else, but that can't be helped. Eventually, I'll get over this hump and find motivation to continue moving forward beyond the need to work for the sake of working. It's just extremely difficult to find that motivation when you can see the puppet strings but are helpless in being able to do anything about them.