Assimilation is a Hellava Drug 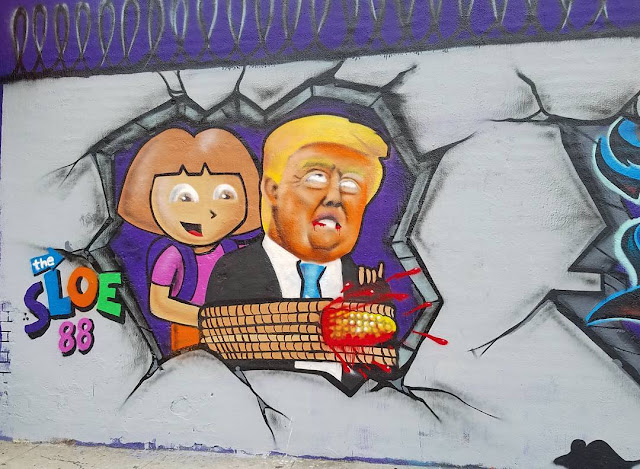 With the Daca Supreme Court hearing, I've been having flashbacks combined with epiphanies of organizing for the dream act back in the day. I specifically remember the arguments and push back we got from everyone else who was older than us, veteran activists, executive directors of immigrant non-profits, and anyone who had a loud voice. You don't know any better, you should wait, this is not how things are done, etc. The excuses were endless and the push back was real. Despite all the haters that kept trying to stonewall the movement, there were twice as many folks supporting actions and ideas that paved the way for daca to become a reality today.

All these years later and somehow I have turned into one of those haters. Life is a trip. It didn't really hit me till I chatted with the homie J about it on Instagram. We both shared the sentiment of how "these kids" had built their lives and identities around daca without knowing the full history of how it came to be in the first place. How they don't know the struggle of living and working under the table and having to rely on AB 540 to get an education. Actually, it shouldn't surprise me or anyone because once I left the immigrant rights movement, I got salty as fug lol

Both J and I eventually reached a point in our conversation in which we both shared that we want nothing but the best for all immigrants and for everyone to succeed against this evil world, but it wouldn't hurt for "these kids" to appreciate what they have and not just have it handed to them. That's when I started getting flashbacks of when we would get shitted on by levas who told us that the dream act was nothing more than a military recruitment pipeline.

I know and understand that drinking that haterade is hella toxic for one's health and I constantly question whether I have any say in how the current immigrant rights movement. Of the people that I came up with back in the day, almost none of them are active in the immigrant rights movement for a bunch of different reasons that equate to life moving forward. Those that are still a part of it fall into two extremes, they've either become too radical for the mainstream or have chugged the entire jug kool-aid that it makes you cringe. Unfortunately for the movement, those kool-aid chugging levas have placed themselves in positions to make decisions and tend to be in front of a camera at every possible turn.

As a result, the current narrative around daca has regressed to what it was in the early days of dream act organizing. That immigrants only have value if they can pay taxes, behave, follow the rules, and are innocent of their circumstances. The talking points you are probably hearing in the news is that 'they were brought here as children,' 'this is the only country they've known,' 'they're Americans without papers,' etc. It is hard not to feel salty and take a swig of haterade when all I read and see in the news is "these kids" spouting all these problematic talking points that they either picked up from others or just haven't been exposed to the larger movement for liberation. Shit, it took me a long time to get there myself and even to this day I continue to grow and unlearn all kinds of brainwashing.

Shit is all kinds of twisted and like everyone else, I don't have an answer. Do I wish that every person interviewed about daca shared how their liberation isn't tied to assimilation? Hell yes. That the goal isn't to just save daca, but to fight for the liberation of all immigrants in this imperialist country. That we should be joining and supporting everyone's fight for liberation and justice, not just for immigrants. Our movements and fights are all connected, it just takes a little bit of effort to see them, but we have to get out of our bubble in order for that to happen. We have to show up for each other and not just share things on social media, even though sometimes that's all we can do.

Whatever ends up happening with daca in the end, I can only hope that this becomes a moment for the current generation of immigrant rights activists to see the bigger picture and start creating real change. If not, then we can all be miserable together.
Writen by El Random Hero at 11:24 PM


We Gill Driving School the best driving school Deer Park Craigieburn & Sunbury. We provides comprehensive professionals. We are very passionate in our work for our unique teaching methods and best leading driving instructors in Deer Park. Our instructors give their best to our students. We love to teaching car driving and road safety to our students. Book your lessons online 24/7 now!