If you've been following me on social media, then you've seen that in the last two years or so, I picked up film photography again. The first time I picked up a film camera as an adult was in 2009 when I took a film class at East LA College. It fulfilled a requirement for my associate's degree in journalism, but I was also excited to learn how to compose and develop my own film and prints. I loved that class and the time I spent walking around with a camera, completing assignments, and learning about photography in general. For sure that class laid out the foundation for learning some of the basics and instilling a deeper appreciation for photography, both film and digital.

So now all these years later, I can say that I am a better photographer than I was back then, but I know there is still plenty of room to continue growing and exploring what is possible and to continue developing my own style. So since I'm in this funny loop of taking pics on film, but then getting them developed and scanned so I can post them on my social media, I got to thinking about other places I can both share my pics, but also provide commentary. Then I remembered I have a blog! So I thought to myself, why not throw them up there. It'll give me another opportunity to reflect on the pics I've taken, but also an opportunity to stretch my writing muscles outside of work. With all that being said, lemme share with you what I think about these pics of the 6th street bridge. 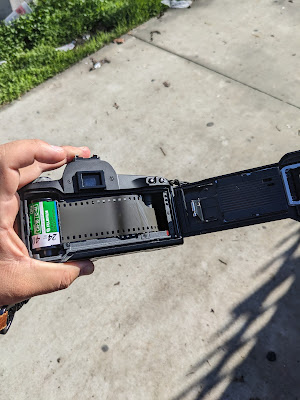 The pics you're seeing here were shot on an expired roll of fuji film that I was given by Joseph of Film Scouts. They hooked it up with the roll last year when I bought a camera from them. Funny enough, I first met them when they had a table at the Torrence flea market, which is where I found the Canon Rebel that I used to take the pics on a 50 mm lens. The batteries for the camera ended up costing more than what I paid for it. Fun fact, this Canon was known as the Kiss in Japan. 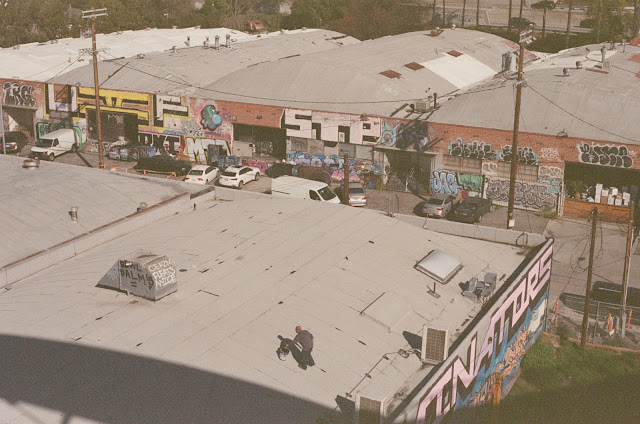 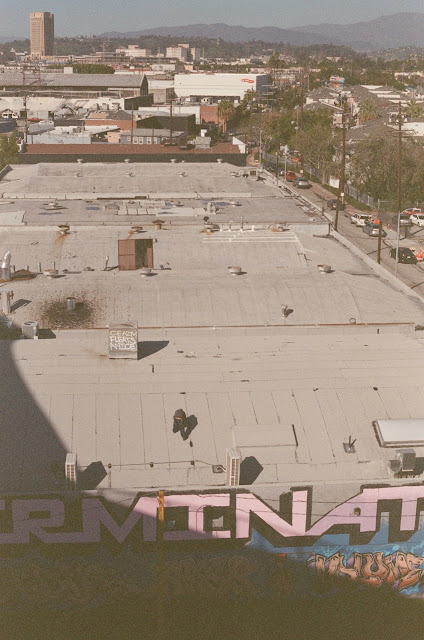 It took me a minute to get used to and appreciate the fade of the expired film. The combination of graininess and daylight appears to me like a reddish, purple hue. Like you know this is film and not digital. It has been a few months now since the bridge officially opened for public use and everyone had their fun on it. Like so many other people, now it has just become another spot to go take walks on in the neighborhood. The day I was taking these pics I was by myself, but most of the time I'm walking with a homie or two, chopping it up. I didn't go on walks along the old bridge like I am this new one, it would usually be with a purpose that you'd walk across it. So it has been interesting how much things have changed in that industrial area around and underneath the bridge. 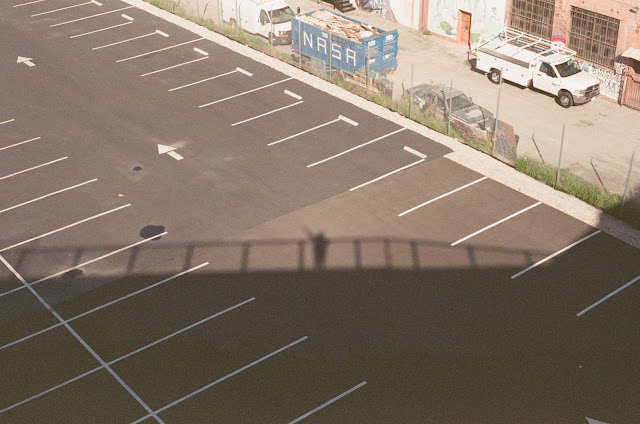 Art galleries, movie/tv studios, and a few random offices/studios make up most of what's underneath and around the bridge. Most got those spaces years ago when things were cheaper, almost in a wave they all realized that they could have access to more space and cheaper rent/cost when compared to having space in the Westside, Culver City. For sure it's what drew some of the galleries with connections to N.Y. For the better part, you wouldn't notice it but now they have taken over so much space that it's hard not to notice them filming or moving equipment around. 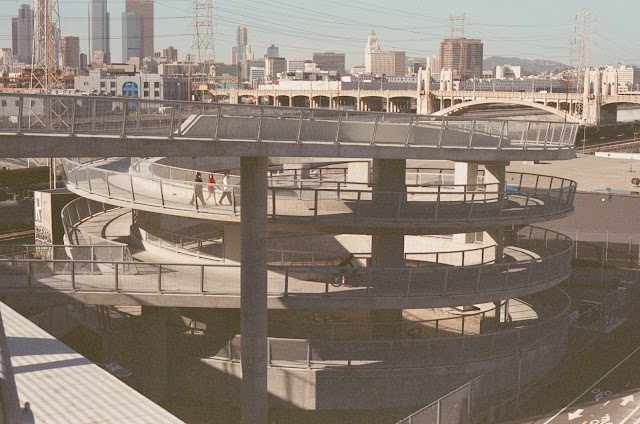 It's fun to people-watch and walk along the spiral walkway that connects you to the other side of the bridge or takes you all the way down to street level. It's just as fun to do it on your bike as well. The vibe will for sure improve once the park underneath is finished, till then be careful down there. When the trains are idling nearby, the exhaust gets hot-boxed under the bridge and it fucking sucks to be breathing that kind of toxic air. 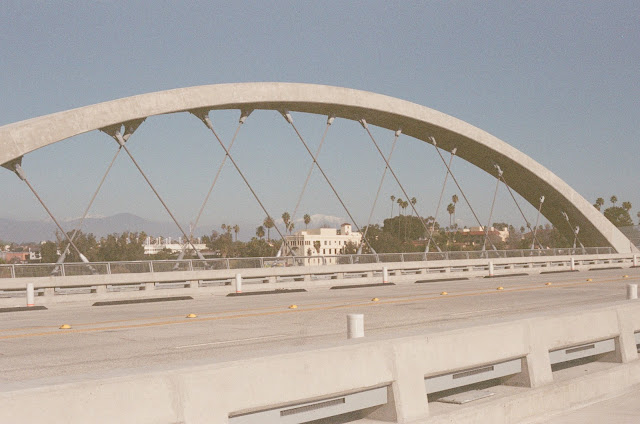 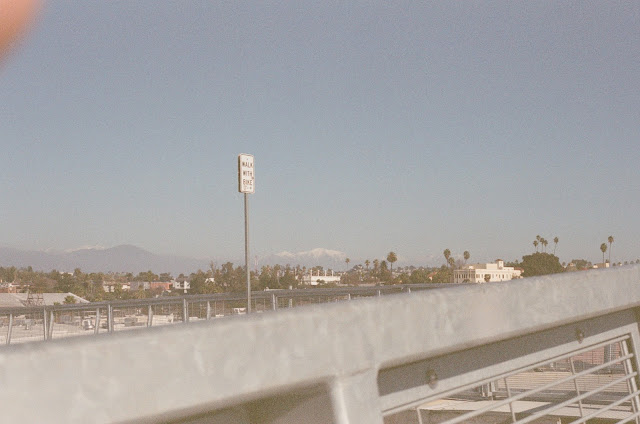 Like in many other parts of Boyle heights, shh don't tell the hipsters, you can catch some dope views of Downtown and the mountains. 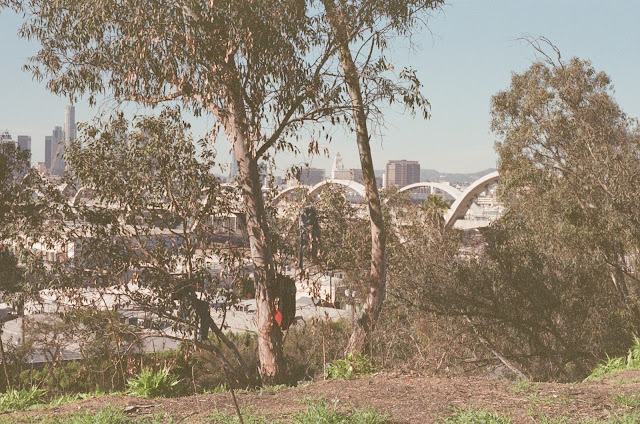 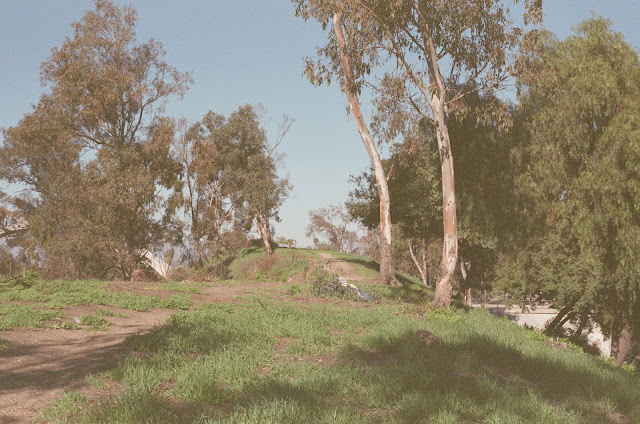 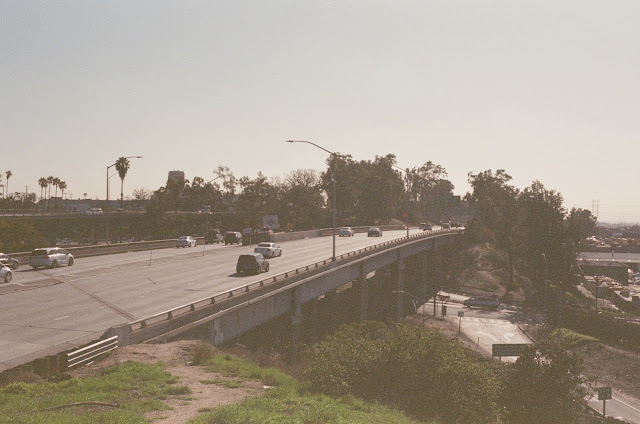 So if you're facing West, you'll notice the trees and grass along the bridge. There's a fence separating the spaces, but you can easily jump over it and walk around. If you're around an hour before sunset, you'll see other photogs on the hill, grabbing sweet pics of the bridge with downtown in the background. Definitely recommend getting your own pics at that spot. Anyway, before the rains hit there were a few houseless folks living there and I hesitated walking around over there cause I didn't want to intrude in their space, but since they left with the rainfall, I walked around for a bit and snapped some pics. If you follow the path you can walk onto the 10 freeway.

That's it for this set of pics from the bridge. For sure I will be taking more pics there in the future and going on walks. If you see me, say waddup.