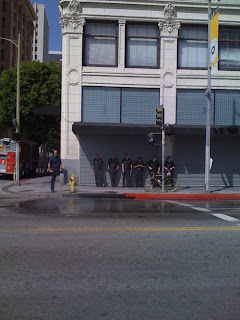 For as long as I have lived in L.A., I have been involved with the L.A. marathon indirectly. For years I cursed it because all it did was cause traffic head aches in downtown. However this year was a little different. On my way to work I was dropped off at Alameda and Olvera st. because of the detours. I started making my way south on Los Angeles street passing through federal buildings and what have you until I finally hit the marathon route on Los Angeles and Third st. The route I took was through little Tokyo because the side walks are more even and it means less work for me on my skate board. As I made my way to the route, I could hear the banging of drums like it was a war march or thunder. 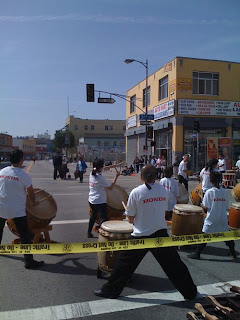 Turns out it was the Taiko drums being played for runners. Even though I was just standing there drinking water from the cups being handed out to runners I felt like running the marathon. The music and people with signs encouraging friends and family to continue on, pushing through the pain really motivates you. 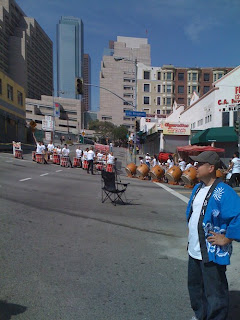 Of course I wasn't going to start running, but I was close and skated with runners on the route. It's really an indescribable feeling to hear the sound of the drums, people chanting and the whole atmosphere of the marathon. As I was skating by I took pictures, nothing big of course because I was using my phone. It was heart warming to see families walking and people walking their dogs in one of the bad sides of town. It was a change of pace from the downtown I'm use to. 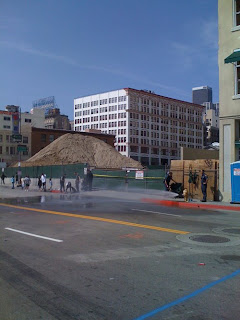 Oddly enough some people chanted and waved to me as I passed by on m y board. Although I kinda felt out of place as everyone is running and sweating while I'm just cruising by passing all the runners. The guy who won the marathon, Laban Moiben did it in 2:13:50. He's from Kenya. Odilion Cuahutle did an awesome job representing Mexico in 6 place with a time of 2:16:44. All in all it was a great experience even if it was just a short glimpse. I did come up with the idea to petition the marathon organizers to let me do it on my board. It's really no different than bikes so why not ?
Writen by El Random Hero at 5:05 PM