What part of legal immigration don't you understand ?

It has come to my attention that writing post about raids, bills and life experiences as an immigrant, I have never explained how the U.S. immigration process works and how I'm still outside the "circle". Thus rather than spending time explaining it in words, I received an email that not only explains the process, but it also has illustrations to go along with it. 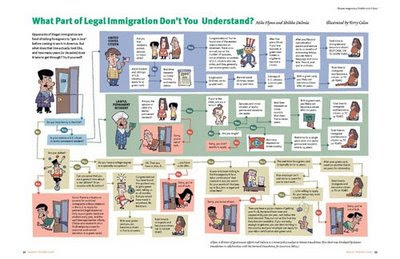 Just in case there's anything wrong with the picture or you can't see it clearly, I'll include the link to it. The chart is an accurate representation of how the legal immigration process works and how hard it is to legally immigrate and become a legal resident and U.S. citizen. Of course it doesn't include all the different type of visas and special conditions that are also out there to help victims of crimes or those seeking political asylum, but it's a great illustration non the less. Pass it on.
Writen by El Random Hero at 4:49 PM