My Life on Video 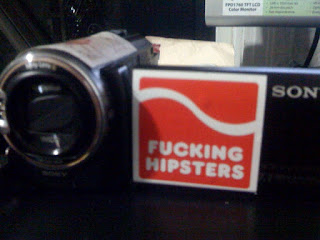 One of my life's dreams has always been to be on the "Real World." That dumb MTV reality show that puts the most dramatic, emotionally unstable, horny, binge drinking people on tv for everyone to watch them crash and burn.  American can't help but to rubber neck when they pass by a horrible accident. I would totally be a perfect fit for that show, except all my crazy swearing and yelling would be in Spanish and thus, subtitled. I don't think the real world is taking in undocumented folks, yet, so the next best thing I have to get that kind attention is this here blog, but things have taken a turn for the better I tell ya what.


For a good while now, I've been meeting, talking and sharing ideas, concepts and personal stories with film makers interested in making a dream act based movie/project. What started as an initial project to get a scrip and shoot a movie turned into making a documentary that follows a dreamer. After a few more meetings and some more developing, the project has now turned in to me and 2 other individuals filming our everyday lives, ala "Amores Perros," connecting our lives from three different and unique aspects that will culminate into an over all story that focuses on us and the undocumented youth/student movement.

So far so good : D I've already filmed about six hours in one weekend and I'm really digging the project thus far. Considering that we will be doing this for the next two months, I have a lot of taping ahead of me that I look forward to. One thing I always tell people is that everyone has an amazing story to tell and share, it's just that most folks don't know how to go about bringing it out or care to do it. An attention freak like me is running wild with this project. In my mind, I already have a list of things I wanna film that have always been on my 'to do' list. Can't say much for now, but think of it like this.

The other day when I was filming, someone mentioned that I reminded them of Mr. Brainwash. (If you don't know who that is, stop reading now.) To which I started laughing because it totally was. Camera in hand, filming everything and asking all sorts of questions about what the hell is going on. While I can't guarantee that I'll be video taping the same stuff Brainwash did, I'm confident that my everyday life will provide enough material to make countless movies. Movies that I will share at my discretion.
Writen by El Random Hero at 10:38 PM