Of a Broken Hearted Mustache 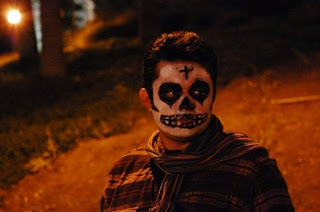 As with anything, I can’t help the natural inclination to reflect on the anniversary of events. November is one of those months for numerous reasons, but for me, it marks the passing of another year with my mustache. The thing has a life of its own and is my most recognizable feature. I’ve met folks at conferences and events who’ve been able to spot me because of the damn thing, despite never having met me in person.

This November marks four years of growing upper lip hair. And while Movember seems like an obvious reason for me to have started growing bigotes in the first place, let me tell you that it’s not. Simply put, me growing a mustache was a result of having my heart broken for the first time and like any good heartbreak story, it’s a good one.

In the four years of having my magnificent mustache, I’ve shared this story with only a hand full of folks. The question of why I started growing one is something I’m use to, but I will usually say something that is funny and won’t have folks asking follow up questions after. So I would just say that I always had mustache envy, and that envy prompted me to grow one. And while that is one my reasons, it’s not the entire story.

I was only with her for about six-seven months total, but it felt a lot longer to me. I fell head over heels for her. She was smart, beautiful, funny, a huge introvert, but we always had a great time together. She was also three years older, which was never an issue for me, but you have to remember that most men are immature for their age. Our mental and emotional maturity is a few years off, especially when we’re in our 20’s. But, there are always exceptions, and I wasn’t an exception.

We met through a mutual friend and from that first night we hit it off. We started seeing more of each at events, gatherings, getting to know each other. Then before I knew it, we had something nice going. We went everywhere together because at that time, I was at my peak of being a community blogger for my neighborhood.

But eventually, it all came crashing down. Around Halloween/day of the dead, she dumped everything on me in a tsunami of resentment, frustration, anger and immaturity. I felt like I got kicked in the face when she went down her never ending list of things that I was doing wrong and what was wrong in our relationship. And whether she knew it or not, she struck at all of the personal insecurities I had accumulated because of my immigration status.

I remember sitting in the car, tears coming down my eyes as she told me her gripes. Each one, amplified a thousand times because at that time, I wasn’t sure of who I was as an individual in relation to my immigration/economic status and where I was with my life. I can be a huge drama queen for the simplest of things at times, but when I heard everything that was wrong with me from the person I loved (at the time), I just couldn’t keep it together.

The days, weeks and months that came after were emotional spiral. I still went on about my daily routines of going to school, work and seeing friends here and there, but I mostly kept to myself. Every encounter with someone meant me explaining what happened between us and that she dumped me. And every time I had to explain to someone who didn’t know, it felt like I was pouring lemon on the wound. That, and the fact that she started seeing someone else right after me.

At the same time though, while I was trying to piece myself back emotionally and spiritually, I let my physical looks go out the window, more so. I looked like a disheveled man because I wanted everyone to see how I felt inside, like shit. Consequently, I was working at a fast food restaurant at the time. Me showing up to work unshaven was tolerated for a while, but a month into it management was stern about me shaving or I would be suspended from work till I did.

Naturally, I complied because I needed that job, but I was still feeling utter crap. Thus I got this idea in my head. I wanted to make myself as unattractive as possible. And I started thinking of ways I could do that without mutilating myself, that’s when I got the idea to grow a mustache. I can barely grow facial hair as it is, so growing a bad mustache seem like the perfect way to make myself undesirable to women.

In retrospect, my logic didn't make any sense, but considering my emotional state at the time; I would have ruined my hair if I thought that would help. So, because an upper lip mustache was the only acceptable facial at work, I ran with it and grew it out. For the first few months, my “I’m gonna make myself look ugly” logic worked. I had a bad teenage mustache that looked as if I had a drunken caterpillar on my lip trying to break dance.

Six months into it though, the stache was taking shape. It was finally long enough to be manageable. To be twisted at the edges so it looked like I had a baby handle bar mustache. And that’s when I started getting positive attention. Folks loved it and complimented me on it. It was a natural fit for my personality and style. A year into it and the attention kept growing. Strangers would constantly ask if it was real, how long it took me to grow it and if they could touch it. There were even times when folks didn’t even ask if they could touch my stache, they’d just go up to me pull on the damn thing.

All the attention and affection toward my facial hair lead me to keep it and to keep growing it out. I eventually got over my heartache and moved on. I’m grateful for having gone through that experience because it helped me mature as an individual and as a romantic partner. And it annoys me to say that because she said that I would one day thank her for what she was doing.

While she may have been right, it still doesn’t excuse how her own immaturity, at that time, in how she broke things of with me. All that stuff is in the past now, even though I have a constant reminder of that point in my life, literally right in front of my face.

I enjoy having a mustache. I like the attention it gets me, the nicknames friends have come up for it, the way it makes me look older because of my baby face. And I like the kind of girls that like guys with facial hair. They’re a lot more fun to be with than girls who prefer clean-cut guys. Chances are I’ll be keeping it around for a few more years. I want it to get to a specific length and once it gets there, then I’ll think about cutting it off.

What started out from a heart-breaking experience literally grew into something more than I could have ever hoped for. Literally. Both my mustache and I still have a lot of growing to do, but with a little care here and there, and some combing, we’ll both end up looking and feeling good at the end of the day.