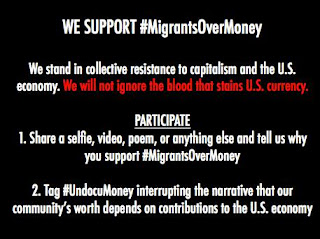 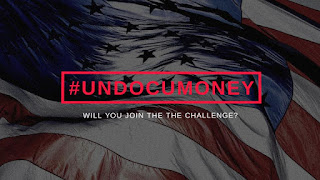 In the last beef among folks in the immigrant/undocumented youth movement, specifically those (myself included) who have been part of the DREAM Act/DACA movement at one point and/or still are part of said movement/fight and the newer crop of folks coming in, why putting a monetary value on the lives of individuals is problematic. Didn't know this was an on-going beef? Well then there are two answers as to why that is. One, you aren't or have never really been part of the "movement." Two, you just don't care and go on about your life. If you are number two, then good for you. If you are number one, then I can't help you there. For everyone else, this is nothing new.

Mind you that it's only been in the last few years that individuals, myself included, have been scandalously vocal when it comes to talking trash on campaigns, actions, and individuals that are problematic. It's so easy to drink haterade, you don't even know. So then, #undocumoney versus #migrantsovermoney. Got it? No? Puez click the hyper links and read it for yourself cause ain't no body got time for that.

So, I first came across the undocumoney campaign because they started following me on instagram. How they found me and why they followed me is beyond me. They probably thought I'd follow back, nah son. I don't give away my follows like that. If you ain't a funny cat or a cute dog, you get no follow from me. I was among other undocu folks when I saw the instagram notification and proceeded to follow their thread till me and the other folks I was with saw their campaign video. We saw it the video and what they were trying to do and we just like, ok. Speaking for myself, I get it.

Clicktavism is as easy as taking a pic and using a hashtag. They rode on the 'hate on Trump' wave and to make an impact. Pretty basic for me since I've been around the block for this kind of stuff. I shared some thoughts with the other undoc folks I was with and for the better part, we were on the same page. We broke down why it was problematic and went on about our day. Except for me and my processeses, I got left with the lingering feeling of finding out who were the folks behind the undocumoney campaign.

Didn't take more than a google search to figure it out. I was cool, y'all do your thing. The maturity I have found in my 30s has helped me avoid unnecessary drama that is a waste of time. Time that could be better spent doing stuff I like. But for the better part, that's where I'm at. I've seen the posting and commenting going on online about the campaign and the reasons to hate on it. I'm 1,000 percent with the Migrants Over Money folks. I've written about the issue of undocumented folks and money here, along with the classism that is prevalent within the movement as well here. Not to mention, the whole conversation about retiring the 'Dreamer' narrative/identity here. Fuck capitalism. Smash borders. Fuck the government etc.

The thing that got to me, and this was surprising to me, was that I didn't wanna hate on the young lady who is putting herself out there to do this. I can stand here and point out everything wrong with it, and while that would be hella fun, the .01 percent of sympathy that I still have is being pulled on here. She posted her story and why she is doing what she is doing here on Facebook, but that wasn't what got to me. In all my years of being part of the undoc movement and other spaces, I have gotten relentless support from others to do what I do.

It's too easy to hate and tear down because it's arduous to be positive and help build something up. That's where I'm at. I'm able to see the divides in folks because they're hella apparent. I fucks with the homies who are radical and wanna fuck shit up over those who have Christian, American, assimilation values. I ain't down for that assimilation shit yo and that's a line in the sand that is deeply drawn. That's why there's beef. The voices of those who are lap dogs and hella assimilated are louder than the voices of those who are disrupting that narrative and wanna change things from problematic identities that pit 'good' immigrants over 'bad' ones.

At the same time though, who am I to talk shit? I ain't doing anything for the movement other than living my life day in and out. I can respect folks putting in work even if I don't agree with the work they're doing. I know that undocumented life and it's easy for me to want to take ownership of it and call out anyone else who isn't down with my version of. However, I've learned that no movement is homogeneous. Not ours, not ones from the past. They've all had their internal beefs and we're no different. History is being written by those with the loudest voices while those who put in work are toss to obscurity cause they're not about getting their name out there or having a fancy title. They're too busy putting in work. I respect that.

At the end of the day though, I realize that my undocumented experience is worlds apart from the normal narrative and archetype. I've learned to just ignore the shit I see online because it ain't my responsibility to save or 'educate' anyone. I know they're not talking about me or my family in those messages. I'll take the lesser walked road and just continue on ahead without giving this beef anymore time than what I've already spent writing this post.