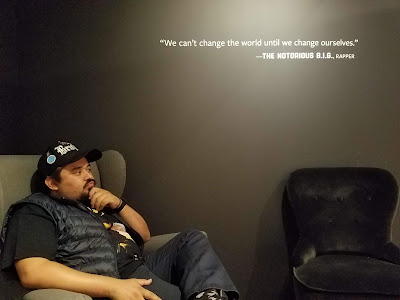 As of late, I've been thinking back to those times when I first started coming around social justice spaces to listen to older folks talk about their experiences and work at events and panel discussions. At first, I'm all like wow that's so and so. I read about them in class and here they are, talking about it in person, still putting in work. Then as the discussion would start, things would get petty pretty fast between how things are remembered by those who were there. All this time has passed and they're still arguing about who should be credited with doing what in the movement and who is a lying piece of shit. Compile that with homophobia, sexism, and a bunch of other problematic isms and all of a sudden, I see those folks I read about in the movement in a whole new light. I wondered to myself how things could have stayed that bad for so long. Well, I'm finally old enough to answer my own question about how social justice movements can stay hella toxic, fermenting if you will, over time.

These last few years, I have been guilty of such pettiness. Still am if I'm being honest. I left the work I did with a bitter taste in my mouth that I didn't yet appreciate. Kinda like when you first drink booze and wonder why anyone would drink that stuff, but eventually you learn to like it. I have nothing to do in those spaces anymore, other than still being on DACA, and I find myself talking shit about who is on the soapbox getting attention, who are the leaders of the movement and comparing them to what I and others did in our day. I mostly do this internally or with friends who also like to drink hatorade.

The moment passes, I roll my eyes and go back to own businness. I will say I have gotten a bit better about not hatin' all the time by either just ignoring things or actively going down the list of why I feel the way I do about how things are going down and who is saying them. At times, I wanna connect with folks and support any way I can, but I left and now I'm being erased. As fast as shit hits the fan, this new generation of folks taking up the torch in the immigrant rights movement is just as fast to respond, for better and for worse. I remember doing the same thing and turning my nose at the history because of how it was brought up and the way said older folks walked around like their shit didn't stink, tried to control everything, and profited from these broken systems. So we said fuck'em, let do things our way. And we did.

I'll admit, it's frustrating to see how things are now, knowing I had a role in building it up and seeing it become just another trend for folks to use for personal gain. But that's nothing new in these kinds of spaces. Whoever has the loudest mouth and connections can have the shittiest politics but be put on a pedestal as a leader to a movement. Hopefully, in a few more years, I can be on the same panel as these levas and call them out on their shit in person, continuing the cycle.