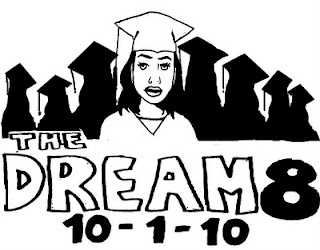 The following is from the official press release. Once again, undocumented students are making history by taking control of their lives and putting it all on the line. I am proud to say that not only are they my peers, but my heroes.

Students Arrested for their Dreams Now Could Face Deportation

Washington, D.C. On October 1st, eight young American immigrants- among them aspiring social workers, professors, lawyers, and engineers- will walk into a courtroom to answer for having sacrificed everything to fight for their rights. For the first time in American history, undocumented immigrants will be representing themselves in a court of law after having intentionally risked their lives in this country.

Reyna Wences from Illinois, Dulce Matuz from Arizona, Myrna Orozco from Missouri, Tania Unzueta from Illinois, Erika Andiola from Arizona, Nicolas Gonzales from Illinois, Laura Lopez from California, and Isabel Castillo from Virginia are charged with unlawful entry based on a mass sit-in on Capitol Hill on July 20th. These eight DREAM-eligible youth sat in the offices of Senator John McCain and Senate Majority Leader Harry Reid, asking them to champion the DREAM Act as a stand-alone bill.

On September 21st, the Senate attempted to reach cloture on the Defense Authorization Bill with the intent of then attaching the DREAM Act as an amendment. However, debate over the repeal of Don’t Ask Don’t Tell dominated the debate in the Senate and they did not reach cloture, leaving the DREAM Act in limbo, and with it, the last hope for these eight young Americans.

Given the ineffectiveness of the Senate, they now face the prospect of being convicted and, pursuant to current law, imprisoned or deported, unless immediate congressional action is taken to pass the DREAM Act (Development, Relief, and Education of Alien Minors). Whether they are found guilty or innocent, ICE is within its jurisdiction to put these youth in deportation proceedings.

At least 70,000 undocumented immigrant youth graduate from high schools every year, and many of them struggle to attend institutes of higher education and the military. The DREAM Act will grant youth who traveled to the United States before the age of 16 a path to citizenship contingent on continuous presence in the country, good behavior, and the attainment of at least a two-year university degree or a two-year commitment to the armed forces.
Writen by El Random Hero at 10:37 PM