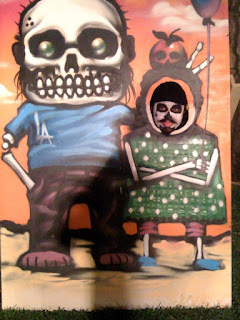 It's time to deport 2010 into the past and welcome 2011 as it just illegally crossed the border. I have a stale sense of humor, I know. Anywho, what would an online journal be without writing something to recap the last year. And what a year I must say. It flew by before I knew it. I'll re-frame from ranting and going over everything that happened this year because even I don't wanna do that. But what I do know is that in my 26 years of life, this has been the best year for me. There will always be set backs and low points, but I can honestly look back into the year and say it was a very good year. I didn't even have to use my AK.

I'm beginning to enjoy the aging process. Noticing that I'm maturing as an individual and growing old with friends new and old. It's kinda hard to explain it right now, but in the back of my mind there is a feeling of comfort. A feeling that everything will be alright and everything is going to work out in the end. I probably won't be able to articulate that feeling until I get there. Still, I know that the next year will have it fair share of struggles and low points. Friends are moving on in their lives and leaving and I'll still be in L.A. doing what I always do in a different time and place. I'm looking forward to the continued growth and maturing that is developing within me.

Who or what 2011 will bring remains to be seen. Hell even I don't know where I'll be. But I do know that I'll still be here writing and sharing those experiences and thoughts. The DREAM Act fight is still gonna continue of course. Now more than ever, will all the noise we made, there will be more people stepping up and coming. The movement put people in check and asserted itself. We are here and we aren't going anywhere. Hell, it's gotten to the point that people know of it anywhere we go. We must be doing something right. So, with that being said, here's to another random year of random thoughts. Salud.