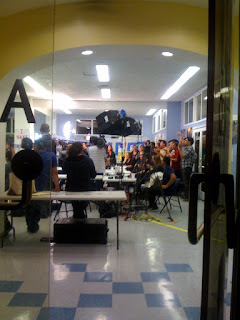 Not to be anti-social or anything, but when everyone else was cheering and hugging when the DREAM Act made it past the House of Reps., I was standing outside of the building staring at the crescent moon, palms trees, lake and people around me. The one's that were going about their normal day, because for them it was just another Wednesday. Still, I won't front. I'm not a bubbly person when it comes to moments of jubilation and joy. It's hard to be succinctly, but more or less it comes from the dysfunctional habits I've accumulated over the years. Being happy is still foreign to me, so when I'm around it, I act differently than others, simple as that. There's nothing wrong with being melancholy, because that's how I am really. I don't look at a glass as half empty or half full, I look at it as it would be pretty cool if I threw that glass outside the window because I like the sound of glass breaking. 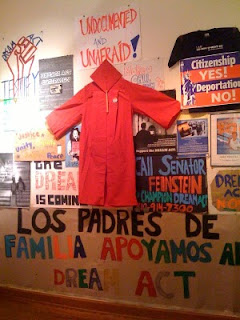 So, with the DREAM Act coming up for a vote on Monday, this upcoming weekend feels strange. Knowing that everything will come down in a few days again, just like it did the last time they voted on it. Whatever may come, advocacy and outreach are still our biggest tools in getting people to support it. So if you're in L.A., go over to the Chinese American Museum by Placita Olvera in downtown L.A. for the "DREAMS DEFFERED" exhibition. The line up of artist alone merits a visit. The show focuses on how immigration isn't a Latino issue and explores American history through a number of interactive tools. It's up for the next 6 months so check it out. 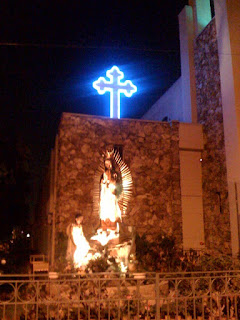 It also seems that with the DREAM Act coming up for a vote once again, we're all asking the powers that be to make this happen. Even I find myself pondering at the powers that be why we gotta live this kind of life. Why I am where I am and all that existentialist mumbo jumbo. It's La Virgens birthday this Sunday, I know a lot of candles for the DREAM Act will be lit. Here's to hoping they won't be snuffed out Monday.
Writen by El Random Hero at 1:30 PM