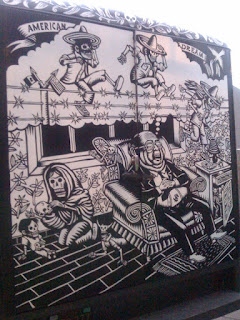 I had a dream last night that I was deported back to Mexico, but I was able to make my way back to the U.S. by speaking English. I mentioned this to someone and they told me, "they are immigrant dreams." "Only immigrants have dreams like that." It's not the first time I've had dreams like that, about running into ICE, friends and family getting deported or me going back to Mexico. Can't really say what brings them up or the why behind them, but they happen and for the better part I just keep them as that, dreams. There's no making sense of them either because that won't get me anywhere, other than asking more questions that I don't have an answer to.

Still, there's a part of me that stops to think about the dreams and what they meant. This morning when I started pondering about it, the song 'ten years gone' by zepplin came into my mind as background noise. I guess more than anything, a common theme in those type of dreams is the passage of time and things only getting worse, rather than better. Then again all these dreams can mean nothing other than my mind trying to work things out as I visit the sandman or they can mean everything. See, that's why I just leave them be cause too many questions come up. Ayy caramba.
Writen by El Random Hero at 12:38 PM