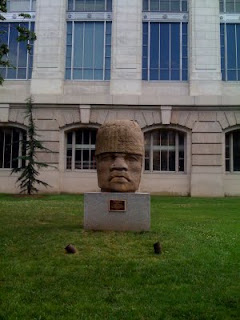 Much like Olmect Head #4 here, I felt outta place in DC, but I'll talk
about that later. First thing some people must be thinking is how did
I fly while being undoc ? Well I'm not gonna talk about that.
Secondly, how did I end up in Washington DC, the nations capital ?
That'll be a secret too but know I was there for a week and loved
every second of it !!

It was freaking cool to be a tourist for once. It was my first time
flying, being out of LA and basically going out and seeing the rest of
the world. I loved it !!! It's nice to try different things once in a
while and it makes one appreciate what we have at home. Specially
regional foods cause the food in DC has nothing on LA tacos.

Flying in itself was pretty momentous because I had to get through TSA
and that whole proccess. But after my first time I was like, hey it's
no different than getting carded at a bar. Flying felt like being on a
roller coaster and landing was pretty fun, as well as looking out the
window and what not.

Duringmu week stay I saw the white house of course, went to a baseball
game and explored through public transportation. Hands down I lovedthe
museums the most, specially the natural history museum. Thatone had a
bunch of net-o stuff. I did get sad with all the animals though.

I'm not much for tourist things, but I really did wanna see the white
house and all that good stuff. Turns out you can rent a bike for the
day there. It wasn't untilmy last that I saw that, other wise I would
have rented a bike and gotten lost in the city. Plus I stuck out cause
of my fashion sense. I didn't dress like the locals and I don't wear
tourist gear.

Im looking forward to traveling again to other states. Getting over
this flying barrier opened up the door to a lot of new opportunities
that will bear fruit. I know I grew little as a person because I was
in a foreign place, and it felt nice for a change