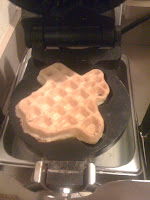 Unfortunately, there's not much I can say about visiting Texas, other than I've been there and I didn't get to see anything :( It is pretty flat though, I will say that. And during my last night there, I finally got the opportunity to try some BBQ !! Nom nom nom !! But how did I end up in Tejas you ask? Well I was there, along with fellow Dream Team L.A. and Orange County Dream Team folks for the 3rd United We Dream Congress. Yes, more than 400 individuals, that are part of the nation United We Dream Network, got together to meet one another, connect the local and national fights going on and to have fun in-between all that work. This was my first time going and I didn't wanna pass up the opportunity to be in a room with soo many individuals that are all part of the DREAM movement, but also from all over the U.S. 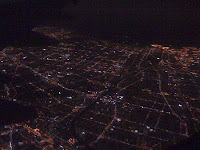 So, for the third time this year, I got to fly somewhere I haven't been to before. Virgin Airlines is a trip. Touch screen tvs, music, low lighting? It felt more like a club than an airplane ride. I spent the weekend there since the congress was a three day event. While I won't go into every detail of what happened during the congress, I'll just share some thoughts here and there since there was soo much going on. Needless to say, I fell a sleep a few times. I'm use to working on little to no sleep, specially during conventions, but since the congress was a tad slow at times, I couldn't help knocking out since I wasn't missing anything important. 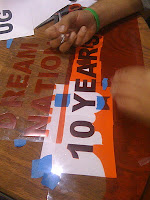 I mean, once I was there, checked in and saw the agenda for the weekend, I quietly muttered to myself, 'umm this is all stuff I already know.' Not that I'm an expert or a know it all, far from it. The majority of the agenda for the congress, that didn't involved voting or a panel discussion, was dedicated for new groups and individuals to build up their spaces by sharing networks, resources and information that isn't exactly easy to come by. It just so happens that here in L.A. we have those resources, networks and information not only at our fingers tips, but down to a science. Take it for what it is, but folks from CA and specially L.A. we're like two, even three steps ahead of others folks, but that's mostly because of how things vary from state to state. 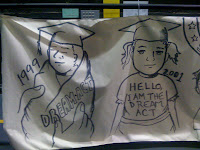 Here in CA we just barely got financial aid, while in other states, folks can't even access public education, PERIOD. Realizing all this made me appreciate the unique space and community I have here in L.A. a lot more, something of which I took for granted because it's always there, you know. But none the less, the congress also showed me that because we are a few steps ahead of folks, it's our responsibility to share as much information and resources with others groups, helping build up their networks and groups. All in all, the congress was a good time meeting so many folks in one room. Not only that, but I also got to spend much needed quality time in getting to know the O.C. folks a lot better, given that we're neighbors, but we hardly see each other.