On being a hater 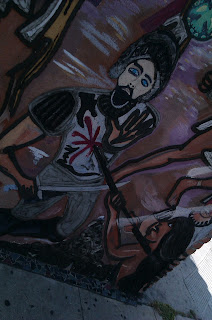 I'm catching myself hatin' on others more and more often. It's something that has been lingering on my mind and now that I'm catching myself as I do it and seeing others do it as well, it's leading to a whole lotta thinking and reflecting on why I find myself hatin' on others. The times I've caught myself doing it, I've reflected on the situation and what was going on around me.

Majority of time, I find myself hatin' on those who I believe haven't suffered, struggled or worked hard enough in their lives. I'll meet someone and before I get to know the person, I'll judge them and make a sort of analysis of how they are as a person. Genius right? Nothing like assuming things about others.

I've noticed that when this does happen, I use it as a way of knowing how and what I can talk to the person about and how I can go about it as well. More often than not, I'll meet someone who I think has their nose stuck up somewhere, check out their style and go from there. It works most of the time, most of the time. I have been wrong before and that is only in getting to know the person that things have change. Other times, my assumptions about said person are confirmed.
For me, when I was a kid, looking people up and down and making a sort of judgment call on how they dressed and talked helped me navigate social circles. It helped me go from one of the kids who got picked on to one of the kids who could hold his own, but knew how to take a joke here and there. Growing up with that kind of mentality turned into it's own thing as I got older. No longer was it about being able to make fun of someone one's appearance, but based more on trying to find a common ground with the person. Whether it was growing up undoc, poor, in the hood, working as a kid etc.

There's an entire list of things like that, that help me establish my repertoire and interaction with others. Weeding out those who didn't grow up like, share micro-experiences or taste when it came to food, music, arts etc. Just as it was helpful when I was a kid, it's still helpful now. By putting out flags here and there, I know how I can act with some folks and what I can get away saying. Those I find I can find those micro-connections with, I bring in closer while those who don't understand are left behind.

I don't see a point in trying to please everyone and trying to be friends with everyone. I can have a sort working relationship with the person, but it's pretty clear that while I'll go on a bike ride to eat tacos and drink a beer, they'll go to a restaurant and talk about whatever is they talk about when they go out. There's also times when I'm hatin' that it comes from a place of stupidity and pettiness.

I've rolled my eyes at folks who I've gotten to know and are successful in their lives because I know their story. I know that they didn't have it as 'hard as me' growing up and that helped them get where they are at. I say to myself that if I had the same opportunities as they did, I would have turned out the same way. Successful. Yeah, it's pretty stupid, but I catch myself doing that, a lot.

Catching myself and making a conscious effort to change that kind of thinking annoys the shit outta me. Sometimes I don't even wanna deal with it, but I'm changing that mind set little by little. Not outta some spiritual epiphany or something, but just because I don't like being a hater anymore. No one likes a hater. I just wanna do my own thing and not have to worry about anyone else I don't care for. You know?

Why waste energy and time in putting hate out there, when I can use that same energy for love and other things on the people that I do care about. I won't ever deny that I hate, even if it's just in my mind when things are going on around me. I constantly remind myself that everyone have their own struggles and works hard to get theirs. For me to hate on them just because I can is stupid and ignorant. I don't have to listen, support or care about the person either, but at least I won't be hating.