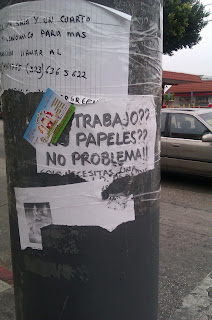 If you haven't heard the news by now, on Friday June 15th the Obama administration announced that there will be new deferred action for immigrant youth who more or less fall under the umbrella of the Federal Dream Act. If you wanna read about the specifics on who and how one qualifies, follow this link to the DHS press release. As soon as the announcement was made, folks started going nuts over the news, and why shouldn't they.

I got the news myself via tweets at seven am about the announcement, I was on my way home on the bus cause I had a few drinks the night before and crashed at a friends house. At the same time, there was an action already planned for that morning at the Metropolitan Detention Center on Alameda, so things were moving fast. Not to mention that earlier this week that movie I was a part of premiered, Time magazine put out their latest issue with Dreamers and Jose Antonia Vargas on the cover, the dream movement was getting mad attention. Media was hunting us down all day for interviews, pictures, interviews etc. to get our reaction on what happened. I even ended up on live radio while the action at the detention center was still going on.

So what does all this mean for me? family? friends? the movement? I still don't know. As folks were celebrating and crying around me, I had on my taco de mierda face. I stared thinking of what was to come and the feelings of anxiousness that every one else was going through. Processing things my own way, I thought about the 'Mutant Registration Program' from the x-men. In comic continuity, this was a bill that required all mutants to register with the government, but it was just a front so Sentinels could track down and kill mutants. That's how I see this deferred action.

We're signing up with the feds to be in the system in exchange for a work permit that has to be renewed every 2 years and until I hear different, only last till you're 30 years old. I'm 27. The guide lines and application process is going to be set up within the next two months, but folks are already jumping the gun trying to go to notaries or lawyering up so they can be sure they qualify for something that we don't even have detailed information on yet.

Figuring out the bureaucracy behind all this paper work is the number one priority now. How much is it going to cost? what paper work is going to be accepted/not? What happens if you apply and don't get the permit, do you get deported? There's so many if's at this point that just thinking about that shit makes me get a head ache. And I'm not the only whose been asking questions of what this all means either.

And in reading some of the news stories put out, I read something that caught my eye,“This means I can be normal. I can go through things without having to worry.” I read this and I kind of had an epiphany of sorts, that this is how the majority of folks feel. They just wanna be 'normal' and go about their everyday lives, without having to look behind their backs or in fear. Getting caught up in my own way of thinking, I forget that other folks see things differently than I do.

As dumb as it sounds, I forget that other folks don't see/think of things the way that I do. I have to remind myself that my shit is my own and other folks will figure out theirs in their own way. Yet, parts of me want to hate and say, 'normal? what the fuck does that even mean? Stop trying to be an uncle tom.' As of late, I've kept that trash to myself, but it's become evident that when I do, it shows on my face :-/

I honestly don't know what is going to happen, but that's nothing new. Work permit or not, life is still going to go on for those of use who qualify for it. There are tons of folks being left out and I guess that's why I wanna be a Debbie downer. Because as some folks shed tears of celebration, others do so in despair and anger because they got left out. We build our happiness on the suffering of others. That's what the dream act movement is all about.