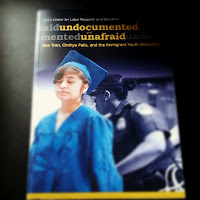 '
Undocumented and Unafraid: Tam Tran, Cinthya Felix, and the immigrant youth movement elegantly captures some of the personal stories and accounts as experienced by those in the Dream Act and undocumented student movement. From the first civil disobedience action by undoc immigrant youth in Arizona, the coining of 'undocumented and unafraid,' to sharing the unprecedented influence Tam and Cinthya left behind, the book captures a rare view of how multifaceted this young movement is.

Following up on the work first started in the 2008 book, 'underground undergrads,' which featured the stories of different undocumented UCLA students and their personal struggles back when the movement was still growing, UU2 adds to the legacy that this movement is carving as it continues to grow, develop and come into its own. While I never did fully read the entire first book, knowing the folks who put it together, reading parts of it here and there and seeing how it was used as a teaching tool, it's safe to say that this second book directly shows how much progress has been made with in the last few years.

A great read in many ways, the first half of the book is dedicated to Tam Tran and Cinthya Felix. For those us of that didn't have the opportunity to get to know them personally, family and friends share some of their fondest memories of them and hold our hands as a bitter, sweet trip down memory lane is made.

Some of the reflections in the book speak volumes to the courage and inspiration both fostered in others. Even when things looked their grimmest, they always found a way to make things happen  and in doing so, they paved the roads that countless other students at UCLA and other colleges soon followed.

The intimacy and heartfelt honesty jumps through the pages at times, and can catch you by surprise. It's clear that Tam and Cinthya impacted a lot of folks with them just being themselves, not counting all the activism work they did on the side, fighting for the Dream Act and equal access to education for all. And after reading all the funny stories on the kind of girls they are, you leave knowing them that much more intimately because you got to know them the way their family and friends knew them.

The second part of the book focus' and highlights some of the major actions, events and growth the undoc student movement has made, culminating from the last 10 years. This is where folks who participated in specific campaigns or actions got to share their personal experiences on what was going through their minds and to give a sort of a directors commentary as they reflect on what happened. The bulk of it comes from all the stuff that happened in 2010, when there were arrest in Arizona, Los Angeles, Washington DC, hunger strikes and multi-state walks.

Two of the biggest highlights in the book for me were queer and undoc immigrants sharing their personal experiences on coming out as queer, but also coming out as/being undoc. Many of the leaders in this movement have been queer, and it's only till now that conversations are changing the spaces we all work in to be more inclusive about sexuality in a movement lead by youth. The other highlight is that of Asian, Pacific Islander immigrants, also sharing their experiences and how the movement, which has always been defined as Latino/a by default, isn't just Latino/a. The formation of groups, like ASPIRE, are taking on leading roles in organizing in their own communities and creating much needed safe spaces and resources to help others.

In the end, the book is not a comprehensive be all end all book that documentes everything in the movement. No book or person can do that because while we all have a shared experience of being undoc in the US and have worked side by side these last few years, everyone's story is unique unto themselves. It's just that some folks are more comfortable sharing theirs more than others, and that's totally fine. But it's in sharing that others are exposed to some of the trials and tribulations we have to under go, and that's how they get to know us.

Tam was one of the first folks I ever saw share her story about being stateless and it was her videos that have first chronicled our experiences as undoc students/immigrants. Since then, there have been those who have followed suit and tried to make movies, documentaries, books and articles about us, but the only folks that have been able to get it right thus far are those of us within the movement. The ones who live it every day. While Tam and Cinthya may not be with us physically, through this book and the memories of others, they'll live on and be talked about for generations to come.