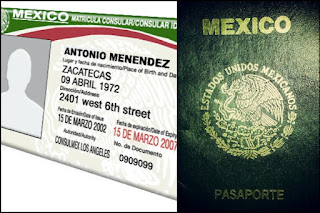 The other day, my cousin sent me a text asking me whether one had to make an appointment at the Mexican Consulate to get your Matricula I.D. I told him I wouldn't know anymore, all I get is the passport, I don't bother with the matricula anymore. When I told him that, he took it as a sign of me being ashamed of being Mexican. He tried putting me on blast by telling me that I'd rather carry an over sized passport vs the ID because it makes it look like I came here legally. My reply to him was to let me know how things work out next time the cops pull him over and he shows his matricula.

Anywho, One has to make an appointment to get the passport, but in reality, it's pointless because you're still waiting in long lines going from one window to another. What they're really doing is just making folks make appointments so they can wait in line at different times, a sort of reverse fast pass if you will. So what the difference between a matricula and a passport? Lemme break it down for ya. 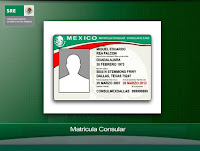 I've explained the process of visiting the consulate and getting said matricula before and for the passport as well. Essentially the same thing, just different lines and fees. Which, by the way is another thing. Fucking Mexican gov charges it's own gente to get IDs from their home country. You'd think they give us a break and offer them for free or something. Anyway, the practical uses for getting this ID is just that, it's an ID that says you're a Mexican national living in the US. I've been able to open a bank account with it, go into some bars, use it to get into gov buildings/courthouses etc. It cost $27 and it's a pain to get it at times because the consulate ask for other forms of ID to prove your identity so you can get the card. This includes birth certificate, school transcripts etc,

Some of the draw backs to getting the matricula are that it's pretty burnt out. Cops know what it is now and use it to fuck with folks when they see fit. At the same time, the things are so cheaply made now that they fall apart easily and look as if someone tried making them at home with a laminating machine. And while this maybe one of the most trivial reasons against the matricula, the thing is just a head ache when trying to go out to a bar, club etc. It always has been, but now it's even worse. 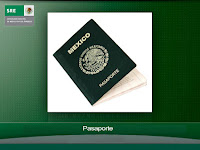 As I wrote before, the process for getting a passport is essentially the same as the matricula, you just end up at a different line. I forget what the prices are for the passport, but it varies between getting it for one, two and six years. I got the 6 yr one. Thing about it though, you can't take your own passport sized photos, you have to get them taken there at the consulate for two reasons. 1. to avoid having them tell you to come back another time because it's no the right size, font or something stupid like that. And 2. because they make money off charging people for the pics. Oh and copies of your docs as well, other wise they'll charge you for those too.

Up to this point, I haven't had any draw backs in choosing the passport over the matricula other than it gets beat up cause it's in my butt pocket. Aside from that, the passport works just like the matricula, but with the added bonus of being able to travel within the US and not getting dirty looks or cocked block at bars and what not. In that sense, my cousin does have a point, the passport does make it seem like you're a  Mexican visiting in the US.

So, for those of you out there who don't already do this, forget about your matricula and just get your passport, from whatever country you are from. It's way easier in the long run, saves you a bunch of head aches and allows you to travel. While my cousins stupidity on me being ashamed of being Mexican by getting a passport is another issue, I ain't tripping on what he said, but I did thank him for giving me something worth blogging about.