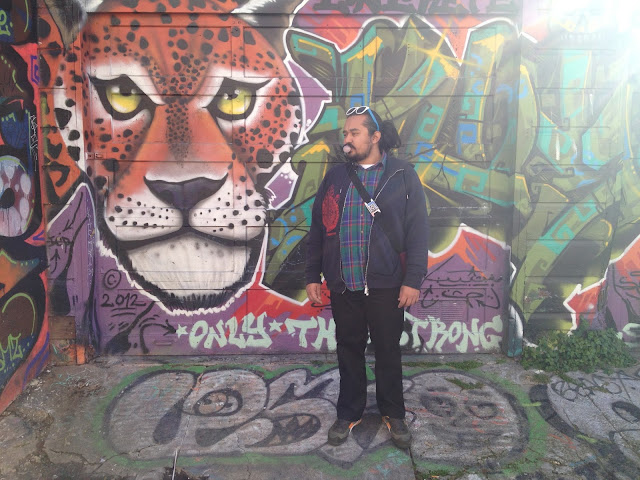 You know, it wasn't until I got outside of my bubble and experienced new things, that I finally realized that living in one place all of your life isn't the best idea in the world. For various reasons, I have spent my life in Los Angeles and no where else. My family moved around a lot growing up, following work. So the notion of being in one place for more than a year was something I wanted to aspire to. To plant roots and let them sink in.

I've never had the opportunity to travel anywhere, aside from areas where there was family. As with a lot of other things in my life, ideas, notions and beliefs I held on to for lack of not knowing anything beyond them, are changing dramatically.  I keep on opening my self to new ideas and concepts that are helping me grow as an individual. Ideas and concepts that seem to be taking me to other places.
Just recently, I took a trip to the Bay Area for the first time. I liked it. I enjoyed my time there with the folks I crashed with, folks I haven't seen in a while and new faces I got to meet. More than anything, this trip help me be more comfortable with notions of moving away and starting off somewhere else.

For years now, I've spent my free time documenting, reporting, blogging and at times, defending one of the neighborhoods I grew up in, Boyle Heights. I built a name around it and a reputation that led me to amazing folks doing great things in and out of the community. But now more than ever, I can see myself not only leaving but wanting to leave. Things have become stagnant.

I no longer feel a need or commitment to report and blog like I use to. To be the one stop resource for everything happening in the neighborhood. Those responsibilities have fallen on others who get paid to worry about that stuff. And for a second I was going to be in that boat as well, but things didn't work out that way.

Even old notions I had of being deported back to Mexico. At one point in my life, if you were to ask me if I ever wanted to go back or what would I do if I did end up there, I would have given a kind of answered that implied the the US is my home and Mexico would be the death of me.

Now those notions have made a 180 degree turn for the better. I wouldn't mind going back to Mexico, but only because I have that privilege. My relationship with my family isn't the strongest, friends would understand my decision, I don't have anyone to worry about other than myself. Some how some way, I'd make it work and I'd get by.

If it's one thing I learned as a kid growing up, never get attached to anything too long because it'll just get stolen, lost or taken away. In some ways, it annoys me that I'm only able to grasp these notions and concepts for the better because I've have the opportunity to some what travel. Even if it's to another city. This getting older thing is quote a trip.
Writen by El Random Hero at 11:46 PM