How I learned English and American pop culture from the Simpsons 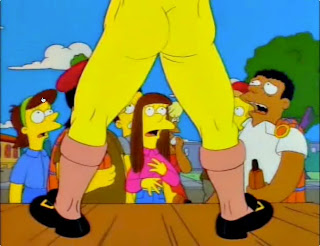 I’ve been re-watching old Simpsons episodes. I’m talking about the first 10 seasons or so, which are the classic episodes folks grew up with. I started watching them because I don’t have a TV or internet connection at home, so these old episodes help me zone out and by happenstance, revisit some childhood memories.

In the early days of when I fist arrived to the US, watching Saturday morning cartoons was one of the things that didn’t really change. In Mexico, I reveled in the time I got to spend in front of the TV watching the same shows everyone else watched, but in Spanish. I asked my mom about this once, and she told me about how I use to sing the Thudercats song when the show came on and I’d be swinging a sword while watching.

And like some latchkey kid, whenever I wasn’t in school, I’d be playing video game or watching TV with my younger sisters. There are too many shows to name that contributed to my mastery of the English language at an early age, but also a wealth of useless pop-culture knowledge that is increasingly becoming irrelevant with the passage time. All these nuclear family sitcoms also instilled false sense of what it meant to be “American,” social norms and what to expect out of universal experiences such as high school and college.

It took me a while to filter out all of the subliminal brainwashing that comes with pop-culture, leaving only a chewy, nugget center of nerdom and knowledge that has helped me navigate different paths throughout my life. Real fans of the Simpsons know that it was much more than a situational slapstick comedy. It parodied old movies, historical events and nuances that can be over looked if you don’t know what to look for.

To me, it’s happenstance that all of the gems dropped into every episode sank deep into my psyche and molded the foundation for my logic, sense of humor, sense of sarcasm and partly, my view on life. But this goes numerous other things such as some of my favorite movies, books, music, comic books, video games etc.

But what makes the Simpsons the exception is that I found the show at a time when I was starting to laying the foundation as I was learning English at home with the TV and at school with other kids.

I guess more than anything, as I laugh hysterically, I’m appreciating the true uniqueness of the show, noticing things I didn’t before and appreciating the simplicity of it all. That I learned English from watching shows like the Simpsons.