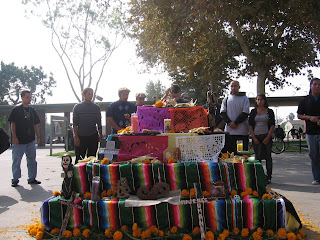 "Dia De Los Muertos" not a Mexican version of Halloween. DDLM is and has nothing to do to with going around in a costume asking complete strangers for treats in neighborhoods you don't even live in. DDLM is a family tradition celebrated in Mexico and parts of South America. In the last two weeks I had the opportunity to write a story for my schools news paper about Ofelia Esparza, a reknowed DDLM alter creater. DDLM has many aspects of it tradition and it varies with families, locations and generations, but the over all reason DDLM should be celebrated by Mexicans or anyone in particular is to Honor those that family memberrs that have come before us and paved the way so the the next generation could havething better than they had themselves. To never forget who they were because no one is truely gone until know one remembers who they were are that they were once alive in the same world we live in.. Esparza in her presentaion talked about her various experiences going all over the world doing what she loves nad helping people understand our traditions and involving them. However the major portin that I took from it again is the fact that DDLM is about remembering our ancestors and to never forget the sacrifices they made for us to get where we are today. This can be best described, as Esparza put it as "Las Tres Muertes." She explained that we all go through three levels of death in our life times. The death from the physical world, the death of being buried in the earth and the worst and most brutal death anyone can go through is the death of being forgoten. If no one remembers who you once were or that you lived how can you live on ? I was lucky to write that story because like other Mexicans I wasn't too sure what DDLM truely meant. I know about all the food and celebrations that go into it but never the true purpose or reason for it. As a result I have found new inspiration to start my own personal DDLM alter when ever I can and pay tribute to MY ancestors because if it wasn't for them I wouldn't be here now would I ? DDML is a time honered tradition that is now becoming more popular thanks in part to a new generation of kids who are embracing their roots and traditions, along with Rage Agaisnt the Machine. DDML is one of those meaningfull times that has grown obscure through time, but now it's returning to what it once was, a time to remember those that came before us family, friends and pets.
Writen by El Random Hero at 11:23 AM