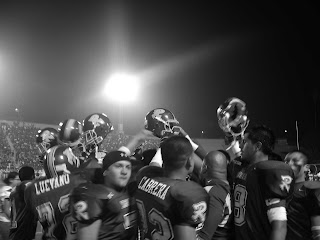 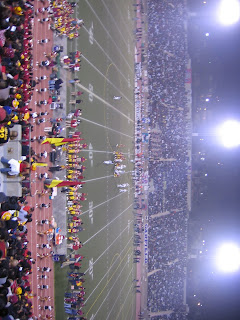 The funny thing that happened after the game was that all the friends I know at school saw me at the game. I was running around the stands taking pictures going up and down. i was on the side lines talking to people and again taking pictures. Everyone comes up to me and says "dude I saw you at the classic. I was yelling at you and you didn't even hear me."
It's amazing how many people know me now and recognize me and the work I do.


The Roosevelt High Rough Riders defeated the Garfield High Bulldogs 23 to 15 in the varsity game while the Garfield sophomores defeated the Roughriders 29 to 14 at the 73rd East Los Angeles Classic.
After losing the last two meetings to Garfield, Roosevelt football players and fans returned to Weingart Stadium ready to get some payback.
With generations of family both young and old attending the historic match up, the rivalry between these two schools is as strong as ever.
A Roosevelt alumni, and one time coach for both schools, Al Padilla says the rivalries origins can be traced to inter-marriage between families, “You come to this game and the mother would be sitting on the Garfield side and the father would be sitting on the Roosevelt side while their kids are out in the field going at it,” said Padilla.
“Stevenson and Belvedere feed the schools. A lot of these kids went to the same junior high and then had to be split when they went on to high school.”
Former alumnae like Yolanda Ruisen, who was in Roosevelt’s graduating class of 1968, says she has two nephews playing for Garfield and that they always make fun of each other and poke fun all in good spirit.
However, when she was a cheerleader she recalls the bus being pummeled with bottles and rocks as they tried to enter or leave the stadium.
Fourteen district council member Jose Huizar was at the game as a fan but was also there to give scholarships to the top two academic students from both schools in the sum of $500.
Huizar has been giving away the scholarships for the last fours years,
“[The scholarships] are given to students showing promise to return to their community and give something back,” said Huizar.
Huizar himself has been coming to the games since a child supporting his older brothers and sisters who were either in the band or on the football team and said that while the rivalry remains as strong as ever, the violence has faded. “I remember coming as a young boy you’d see gang fights outside in the streets.
Thankfully this game has gotten to a level that’s showing on a competitive level our community and schools pride in a positive way.”
Luis Cortez who was a Roughrider senior in 2002 said that now that the classic has returned to ELAC after being moved from L.A. Coliseum, the fans and players become more involved in the game, “The intensity of the game brings it out of the [players] and the fans get into it,” said Cortez.
“You can hear more of the fans, it’s really close [compared to the coliseum]. I would have loved to play here as a senior.”
Before the game, Cortez gave players a pep talk about the game saying, “As long as you put your heart out on the field, you shouldn’t cry after win or lose.”
Janine Olmos who was a student at Garfield in1979 has a son, Juan Lopez played in this years game. She also remembers when the rivalry was far more heated than it is now, “ I was a freshmen with the band and as we were driving out, our buses were bombed with bottles and rocks,” said Olmos.
She said that she’s happy that rivalry isn’t as bad as it use to be.
She says that now she can, “Watch my son play and see him have a good time out there.”
The games significance goes beyond the rivalry as both schools crown their home coming kings and queens at the game. Bands, cheerleaders and the flag drill team also had a stake in the game.
During half time they all faced off dueling each other.
As one school would take the field the opposite side would fill the stadium with boos and heckling showing that the rivalry is as strong as ever.
However, it was all in good clean spirit as the community got together to see old friends again and to remember their past as a new generation of students make theirs.
Writen by El Random Hero at 4:31 PM