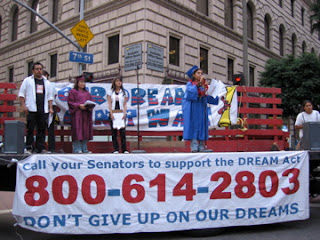 East Los Angeles college club members from the Student Advocates for Higher Education and Equality club participated in a mock protest to respond to the DREAM Act, legislation s.2205, failing to meet the required number of votes that would have put the bill up for discussion. SAHEE members joined protest organizer CHIRLA, The Coalition for Humane Immigrant Rights of Los Angeles, students from Glendale community college, UCLA and Cal State University Northridge in the mock graduation on Seventh and Flower in Downtown L.A. during rush hour from 3 p.m. to 5 p.m. asking “Now What ?” Students attend colleges and universities over coming great economic and personal strides to attain degrees in teaching, medicine and law only to be stopped dead in their tracks because of their resident status in the U.S. Ana Verdin, who just recently graduated from Glendale, participated in the protest handing out fliers to people passing by wearing her cap and gown, as were others, explaining to them what the DREAM Act is and asking for their support to pass legislation of the bill. Lizbeth, who only wanted to be mentioned by her first named, said the goal of the protest was to “Send a message to the Congress that has failed us so many times. We need the DREAM Act and we need it now. We’ve followed the American ideology, we’ve studied hard, worked hard and we’re graduating. We’ve done everything [the U.S.] wanted us to do, now what? Now what do you want us to do? We’ve got our degrees, we can’t work and we can’t do anything.” During the graduation, students received a paper that said “Now what?” as their educational goals were being read aloud, the majority of them wanting to be attorneys and teachers. During the students impersonated ICE agents dramatizing the round ups of immigrants across the country and the fact that students can be just as easily deported. Students also marched around Grand and Flower as people were getting off of work, giving them fliers and causing traffic congestion. Director of the student support program at California State University of Los angles, Steve Teixeira was on hand to support students who CSULA and are immigrants. He says that they are the students who work harder while still holding a job and supporting their families, “A Fuersas.” He respects that they put so much time and effort to organize and realize that change will have to come from a change in government legislation. Emotions ran high as the mock graduation got underway and students chanted protest slogans like “Hell no we won’t go” and “Si se puede.” Valedictorian Imelda Placencia, an undergraduate at UCLA, cried as she was explaining who she has worked so hard to attain her High School Diploma and her Associates Degrees. The struggles and obstacles she had to ever come and endure only to be denied of her ability to use them. “The DREAM Act is not just another piece of legislation. It holds the future of thousands of undocumented students across the United States,” said Placencia. Hector Elizalde, field representative of Congresswoman Lucille Roybal-Allerd, was on hand to let students know that the Congresswoman is supporting them and their cause as she was in Washington fighting for the bill. Elizalde read a letter stating that Congress would not stop working until the DREAM Act would pass and for students to not be discouraged and continue on. “Despite the setback in the senate, the house of representatives will continue to fight to pass the American DREAM Act. The DREAM Act students should not be left behind during [Senators] efforts to pass immigration legislation,” said Elizalde. He encouraged students to continue their efforts by calling California legislators and writing letters letting them know that the DREAM Act needs to pass. Alma Marquez, Director of Government Affairs and Community Organizing for Green Dot Public Schools, was also on hand supporting the DREAM Act and letting students know that they are behind them supporting them, “This is the civil rights issue of our generation, of your generation and of future generations and we must act now. We must hold the democrats in Congress accountable and as people who can urge other people to vote we must encourage them to be bold for you, bold for children who cannot yet speak. We cannot let another year pass without this legislation. We need this legislation to ensure that we have a well educated work force so that we don’t have to import talent,” said Marquez. Seth Brysk, Executive Director of the American Jewish Committee, assured students that they have the support of the American Jewish Committee in their struggles to pass the DREAM Act. Brysk said that because he knows how much of a difference public education can make in a community; they will continue to support the DREAM Act and pro immigration legislation's. “We must give students the opportunity to complete their education regardless of immigration status to pursue higher education, to obtain their legal status and to contribute to American Society.”
Writen by El Random Hero at 11:56 PM