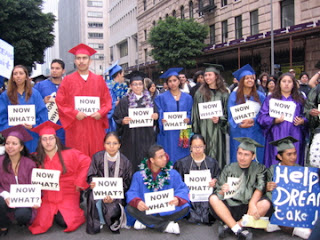 In late October, Congress rejected the Development, Relief and Education for Alien Minors Act, known as the DREAM Act, along with the hopes of students who were depending on the bill to change their lives.
The DREAM Act failed to get the 60 votes it needed that would have brought the bill up for discussion and possible legislation.
The bill, which is supported by both Republicans and Democrats, has seen many reforms and adjustments since its inception in 2001 and keeps growing as time passes and voters become aware of it.
The problem with the bill is that there are still many people and voters who aren’t aware of the bill, but they are also ignorant as to how this legislation would drastically change the lives of thousands of students, the majority of whom are enrolled in community colleges and universities.
Students who attend colleges and universities under California legislation AB 540 have to pay for all their fees free from all financial aid outside of select scholarships.
They have been brought to this country as luggage by their parents at such a young age that they didn’t have a choice in the matter.
They are subject to deportation at any given moment if caught by immigration officials.
They are forced to hide and make ends meet at menial jobs drastically below their intellectual capacities such as waiters, clerks or manual labor.
The DREAM Act would help students currently attending a college or university and those who have already attained their Bachelors and in some cases, Masters degrees in law and medicine by allowing them to use the degrees they have worked so hard for and spent their life savings paying for.
There are those out there who argue that immigrant students are taking up valuable seats from American students in colleges and universities robbing them of their chance for success.
The U.S. is the land of the free and if you choose to deny yourself higher education that is your choice, but don’t get mad if there are those out there who take advantage of all the educational resources this country has to offer.
There are those out there who want to accomplish what their parents could never dream of back in their native countries because of political unrest, corruption and poverty.
Stop and think for a second how drastically different your life would be if you couldn’t drive because you can’t attain a drivers license?
Think about if you couldn’t get a decent, respectable job that paid you the state minimum wage with possible health benefits.
Think about if you didn’t qualify for any kind of financial aid and had to pay for your schooling while still maintaining a home.
Imagine not having any help from any type of government service while keeping a low profile from fear of being deported and yet you are college educated in this country.
This is what the students relying on the DREAM Act have lived with all their lives.
They live in fear, day by day not knowing where their next meal is coming from or if they’ll even be able to pay the rent.
Immigrant students put in more effort and work harder because they know if they don’t, they’ll never get anywhere.
The average immigrant student has aspirations of becoming a teacher or lawyer because they want to go back to their communities and help those like them.
At the same time, there are those out there who see the DREAM Act as a free pass to the children of immigrants.
Some say the DREAM Act would only cause more and more people to immigrate here to the U.S.
Under the DREAM Act, students only qualify if they arrived in the U.S. before the age of 16, attended and graduated high school successfully and have attained a degree from a university or college or are currently enrolled in one.
The DREAM Act would only benefit students who are asking for a chance to be legal residents of this country and the opportunity to work hard, get a well paying job, buy a home, have kids and contribute to this great country.
With the upcoming presidential election there is a growing fear that something has to happen with the DREAM Act as soon as possible because all of the nation’s attention will be focused elsewhere.
Yet, no matter how many protests are organized and how many letters and phone calls are made to congressmen and senators, people don’t comprehend the massive impact the DREAM Act will have in the lives of immigrant students.
It would give them a chance to be something they have all worked hard for and have paid their dues for, a chance to become citizens of the country that became their adoptive home.
Writen by El Random Hero at 12:47 AM