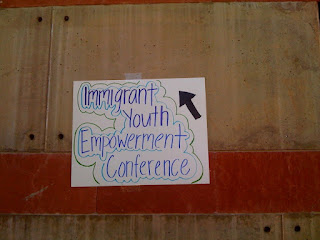 It's funny how things can change in the span of one year. Last year I came to the Immigrant Youth Empowerment Conference as a participant hoping to learn and connect with others. This year I was asked to be a workshop facilitator for immigrant identity. I didn't really know what to expect, even though I prepared for the workshop. More than 1,200 people singed up and more than 900 showed up, for sure. Parents, high school kids on field trips and other people who wanted to find out more and be involved in the movement. Most people come find out more information to help their students, family, friends or themselves. 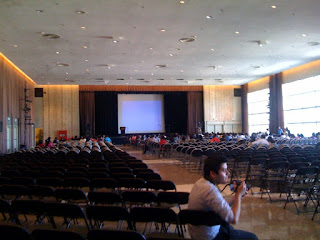 Some of the differences from last year besides more attendees were the addition of more workshops that helped students who wanted to be more pro-active and information for people who just wanted to learn more. I remember last year, Tam gave a speech at the beginning, this year she was honored as she has transitioned on with Cinthya. the IDEAS project directors gave everyone a great welcome, explained what the day would kind of bring and kicked off the festivities. Another difference from this year was that I knew a lot more people than before. From all the work I've been doing with Dream Team Los Angeles and other activist, I've built beautiful relationships them. 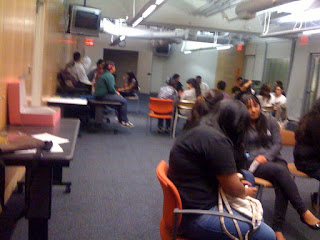 In total I gave three separate workshops. The first was the smallest, with 15 people coming. The majority of them were moms who brought their kids because they wanted to help them by learning more about the resources and help that's available to them. They liked what I had to say about identity and asked great questions and also great commentary. They understood and acknowledged that they have difficulties with their kids because they navigate two different worlds at school and at home. We talked about social influences and other aspects of identity that dealt with shame and pride in one's heritage. They helped me when I couldn't translate words into spanish.

The second workshop had more than 25 kids, all of them in high school. Because of the larger group, I split them into 3 smaller groups and proceeded, the same with the third workshop, but I'll talk about that one in a bit. For the workshops, I used Bruce Lee's philosophy of being like water. Taking shapes and forms as needed to move around effortlessly and adapt to change when needed. I explained that identity is like water, fluid and ever changing. Able to take on whatever shape it needs and flexible. I then started asking questions about stereotypes, getting them to think about why people use them by using myself. I tricked them into stereotyping me and then leading them through the questions of why they did it, how they felt about it and similar experiences they had like that. A basic, don't judge a book by its cover scenario.

The third workshop was the hardest because it combined my need to facilitate the workshop in spanish and dealing with high school kids. Every time I asked them for commentary or questions, they all stayed quite. Damn high school kids, sigh. I kinda amazed myself by the degree of which I was able to translate what I was describing in terms of my questions, analogies and getting students to participate. It was also difficult in part because the spanish speaking students were clowning around with friends, acting "dumb" by repeating questions to me and not taking anything serious. I could tell that they were still not fully assimilated into the school system or life on the U.S. 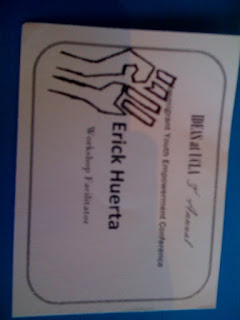 I also drew on my name tag when I had a few minutes to chill. Over all, the IYEC was fantastic. The kids and parents that when to my workshops liked it and some thanked me when it was over. They liked that I made fun of myself to ease the tension and to create a space to have them share anything on their minds. Hopefully they took something out of the work shop and apply it to their lives. By no means am I an expert on identity, but knowing how I am, I felt comfortable in sharing knowledge with youth who are taking up the helm once I drop it. Not that I ever will, but I ain't getting any younger and this is what I love doing, sharing knowledge with youth. I don't have the right answers, but at the very least I can help someone else find the right answers for themselves so they can figure it out own their own. Kids, sigh ....
Writen by El Random Hero at 6:36 PM