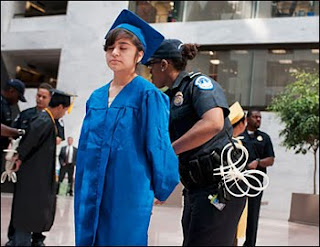 Diana Martinez, 18, an undocumented student, was one of 12 arrested after refusing to leave their sit-in in the Hart Senate Office building.
An estimated 65,000 illegal immigrants graduate from U.S. high schools each year.
The Washington Post-Mark Abramson
"I'm not going to lie and say that I'm not afraid of someone coming in and trying to arrest me, but I can't let that fear take over my life," said Teodoro, 22, a student at the University of Massachusetts in Boston whose parents were deported back to Brazil a couple of years ago. "The only way of people finding out about my situation is to tell my story."

Washington Post article on everything that is currently going down in D.C. right now.
Writen by El Random Hero at 7:20 PM