So, I was in Cincinnati for a few days 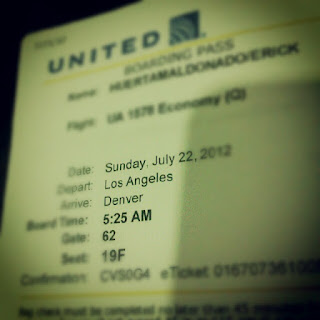 And I had a blast. What follows is a 'look what I did on my vacation' style photo blog post. You have been warned. And yes, I consider going to Ohio a vacation because I didn't have to pay for airfare or a hotel room the entire time I was there and I got to get away from LA and work for a week. 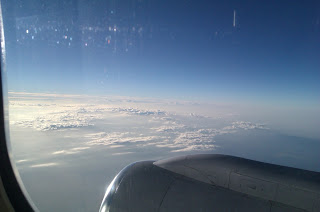 I flew out on my actual birthday, which was cool considering that I partied pretty hard that same Friday. So even though I spent half my day going from one flight to another, it was still worth it cause I napped the entire time. 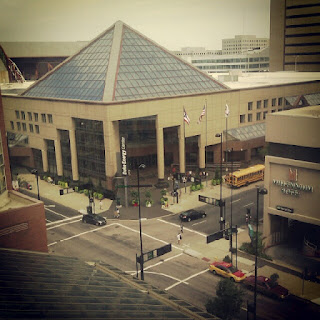 The view from the hotel room was pretty sweet. I ended up bunking up with Jesus, one of the creative minds behind dreamers adrift. Best roommate ever. 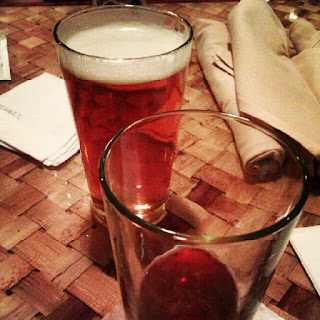 By the end of the night, once we finally got our hotel rooms and checked in, I had to get a celebratory birthday drink in the over price hotel bar. The brew was good, but the hot wings and nachos I had totally fucked me up. I had chorro all morning the next day. Not cool, not cool at all. 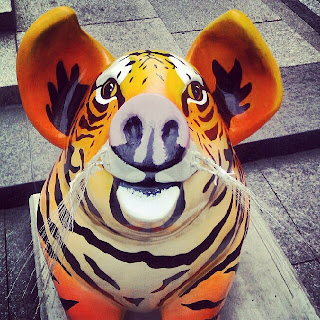 I started exploring the city the next day. But there's not much to explore since we were in downtown, which is lame. Even the pig art they had all over the place didn't do anything for me. Except this tiger pig. 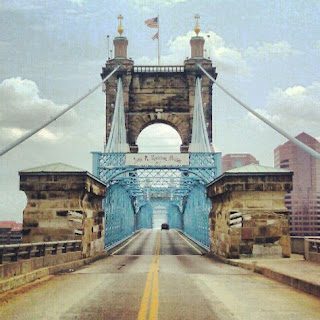 I forgot the name of this bridge, but it's a historical land mark. It's in-between the baseball and football stadium. I was pretty cool and we ended up walking across it to Kentucky, which was a stone throw away. There was nothing there and all we did was just exhaust ourselves. 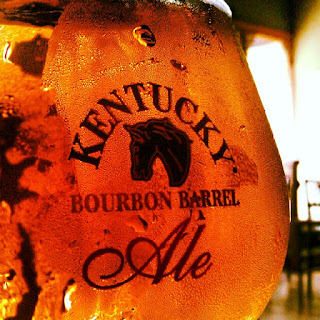 We ended up finding a bar as we were making our way back to the hotel. That kentucky ale was really good. I got a good buzz from it considering I was dehydrated. We chilled at the bar for a while and then ended up taking a pirate cab back to the hotel for $6. 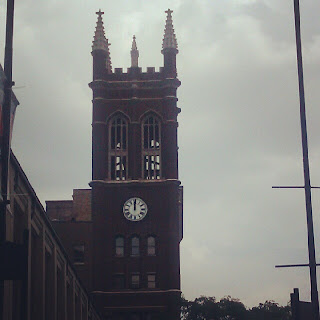 The city has beautiful architecture and it was a shame that because of the gentrification going on develop their downtown, all these old churches and buildings are falling apart. 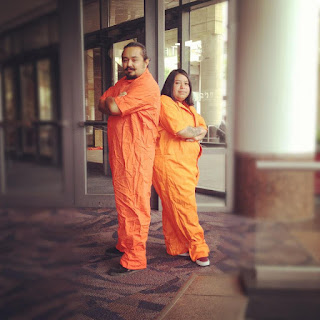 Straight up, the entire time I was there, I would end up waking up around 10am ish because of the time change from West to East. That and because we partied every night. Anyway, following day at the convention, they had a panel discussion on the cradle to prison pipe line for youth of color. So they had these jump suits laying all over the place. I on the other hand got into one with the intention of doing street theater. The homie Nancy joined me and then before I knew it, other folks were doing the same. It was pretty cool and as Nancy put it, I was satisfied with myself for doing the improve to action. 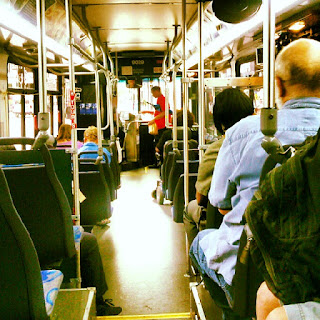 After we regrouped in the late morning, we took a bus to a record store not to far off from where we were. Course it goes without saying that like in LA, mostly working class folks take the bus, so it was nothing new for us to just chill and blend in with the crowd. 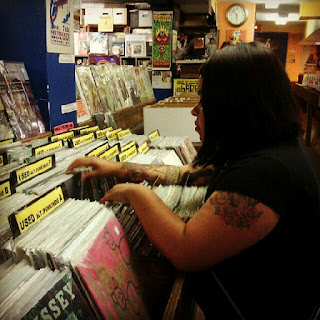 We ended up at Shake it Records. The homie Jesus was the one that looked it up and as you can see, we all had a great time there. Def worth a visit if you're in the area. 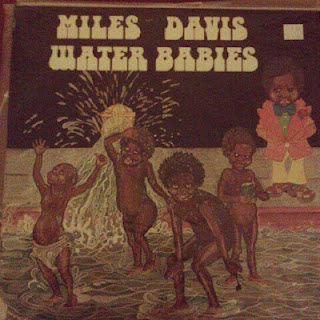 I ended up picking up Miles Davis and Art Blakey during our record shop trip. The album art for this one though, was what sold me. 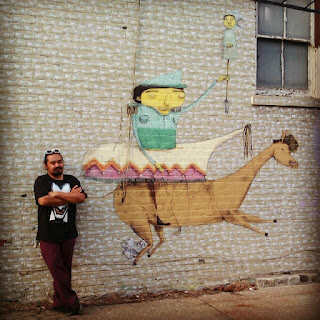 During the bus ride to the record store, both Nancy and I spotted this gem from the window. It was funny cause we were both looking out the same window and once the bus passed by the piece, we both turned to each other and pointed it out to each other. Os Gemeos circa 2004 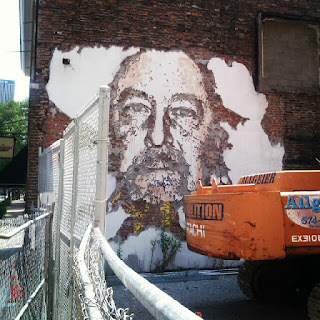 The next day I got a shot of this JR piece right outside the convention center. Funny thing is that the night before, we were drinking in the same building. I also ended up going to this little cafe right next to the bar, around the block. Good grilled cheese. 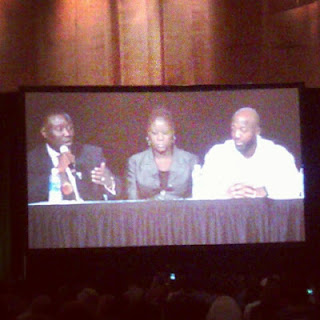 The last day was kinda intense for the better part. It was our last day there and there was some folks I wanted to catch at the convention. The first was Maya Angelou, who was amazing in what she had to share. The second was Treyvon Martin's parents, who were there to talk about violence and youth of color. It pretty much set up the entire day from there. 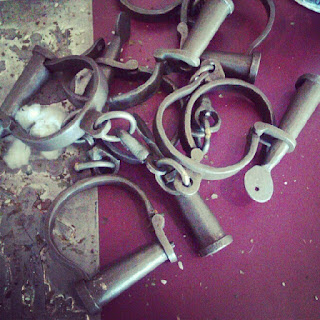 The last stop for the day was the National Underground Railroad Freedom Center. I didn't care much for the museum and it's presentation of the history the state has with being one of the stops in the underground railroad. Pushing buttons and being separated from the reality of how fucked up slavery was didn't rub me the right way. But then again the museum wasn't meant for folks like me. 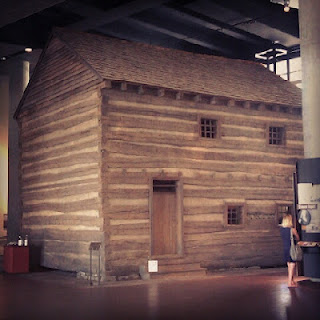 By far, the most intense part of the museum was when I stepped inside the restored slave warehouse. I kid you not when I tell you that as soon as I was inside the cabin, I felt crazy energy all over my body. I could feel what once happened in that room and given my own life experiences, I can relate to it. I've never felt that kind of energy in my life before. 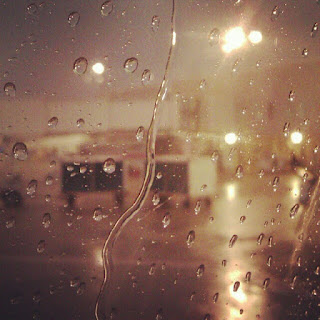 After the museum visit, I had to go back to the hotel room and get all my ducks in order to go catch my flight. I don't know what it is with the East coast, but it is freaking schitzo. The entire time I was in Ohio, it was hot and muggy as fuck. I get to the airport and there's a fucking thunder storm delaying the flight? What the fuck? 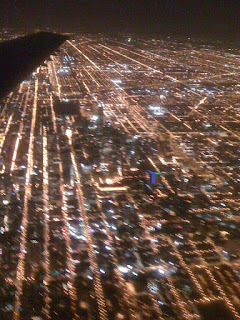 Eventually we took off and I had to run to my connecting flight in Chicago, which was fucking amazing !! I had my head glued to the window the entire time we were flying over the city. Simply amazing. I ended up getting home around midnight. Caught the flyaway to union station and then took the bus home. And that concludes my vacation blog post. I'm hoping that I get to travel or fly somewhere else again before the summer is up, so here's to more traveling :)
Writen by El Random Hero at 9:08 PM