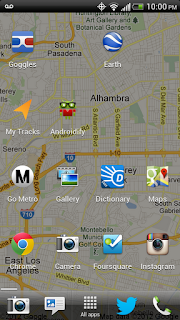 I've been upgrading random little things as of late. Once I got my scholarship check from my summer internship, I paid back some debts, class fees etc. I started catching on other items that I wanted to upgrade. One of them was my phone. I went from a crappy HTC Wildfire S to and Evo 3D V, as you can see from the phone screen shot. I ended up getting rid of my jail broken Iphone earlier this year by going to Virgin Mobile. Best decision I ever made. $40 a month for unlimited texting, internet and 300 minutes. Way better than what I had before.

I had the Wildfire for a minute, and while it was nice to have internet access on my phone again, it wasn't cutting it. The phone had a 512 mb internal memory. I barely had enough room to do anything, let alone get more apps and features. That's why I traded up to the Evo 3D since it was one of the better phones Virgin offers. I looked up the specs and everything before I made up my mind and I'm waaaay better off with it. The fact that it has 1 gb of internal memory versus the 512 mb the wildfire had, means that I've been able to catch up social media wise.

After all that's how all of this got started and built up, through a smart phone. When I first started becoming more active in writing for this blog, and a few others I contribute to, my Iphone was my number one tool for accessing the internet, taking pics, video etc. Both smart phones and the Iphone itself have come a long way from the first generation model that I had, which makes it easier and cheaper for me to grab a phone that's giving me more options, tools and resources to work with than I've had the last few years.

So what does this all ultimately mean? Nothing really. I love technology and I geek out on apps, gathering information, taking pics, being on instagram all that mumbo jumbo. Ever since I got a laptop last year, things have been easier technology wise in all aspects of my life. Having a smarter phone only compliments it, even though I'll still a few steps behind the curve tech wise. But that's cool, I know how to make the best out of what I have and still come out on top.
Writen by El Random Hero at 12:29 AM