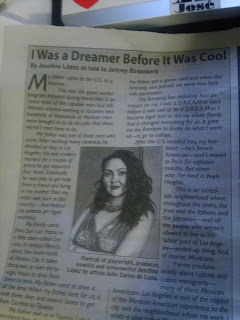 That awkward moment when an ally wants to help out with the best of intentions, but something goes wrong along the way? This is one of those moments. Josefina Lopez of "Real Women Have Curves" fame is someone I have met in multiple facets. I have met her as a playwright, as a neighbor in Boyle Heights, a fellow lover of the arts, and as a patron of her theater Casa 0101. I've heard Josefina share her families story of coming to the US on multiple occasions. However, in this latest story, Josefina said something that made me do a what the fuck?

"The Amnesty law definitely had an impact on me. I was a D.R.E.A.M.er back before it was cool to be a D.R.E.A.M.er. I became legal and so did my whole family and it changed everything for us. It gave me the freedom to finally do what I wanted -- to go to college."

Yeah, what the fuck right? She was a 'dreamer' before it was cool? Huh, it never once occurred to me in the last 20 years of being undocumented, that I was cool for living such a life style. Josefina wrote that little tid bit in a piece where she talks about how her family came to live in LA. In the piece, she talks about her dad being a bracero, what they went through and how they adjusted their status with the Amnesty of the 80's. She also talks about being undocumented for 13 yrs.

Sigh... this is where things get a little tricky because it's hard not to get into oppression Olympics when it comes to situations like this. Sure I can throw a bunch of stuff out there on how Josefina is full of crap, her is experience is nothing compared to that of others and that she should shut the fuck up. But I won't.

Instead, I'll focus on how Josefina had good intentions in writing about her families arrival story to the US, but she choose language that is disrespectful not only to 'dreamers', but to all immigrants. No one's struggle should ever be ranked or valued more or less than anyone else's. We all go through our own stuff in our own way. Sure, we all share same similar experiences, but never with the intention of validating or discrediting someone else's.

That's where Josefina fucked up. She straight out played up her families struggles to make it seem like they lived such horrible lives and had to endure so much to become legal residents. I'm sure they went through some hard times, but it's not about that. Fuck, technically she's not even a 'dreamer' because she doesn't qualify for the Federal Dream Act, cause you know ... Dream Act = Dreamer ... She was born in 1969, that's a completely different generation.

Point is, Josefina fucked up big saying that being undocumented is 'cool.' That she's cool for being undocumented for 13 yrs. Have I told her this? Mmm not really. I couldn't get an email to send her my thoughts on what she wrote. Not even her website has a contact for her that isn't someone else. And at this point I could careless really. I just wanted to vent a little because I was pissed when I first read her gibberish.

Allies having the best of intentions, but making things worse is something I'm no stranger to. Josefina is no 'dreamer,' no immigrant rights hero, nada. She's just Josefina Lopez. And she needs to remember that next time she wants to talk about being part of a movement that can speak for itself and don't get it twisted.