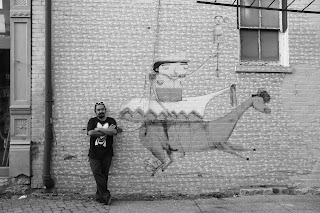 For the longest time, it was always easy to blame whatever wasn't right in my life on my immigration status. Since I was seven years, I've been aware that I'm undocumented and it affected what my decision making process was, has been and will be. It's easy to say that I have don't have independence, stability or a kind of academic success because I'm undocumented. But then again, I never did give a fuck, I just used my status as an anchor point to cry wolf, draw attention to myself and revel in self pity and loathing.

Alas, it's only now that I'm in my late 20's that things are coming into place, and most importantly, making a kind of sense that is tangible and not just cursing at the wind. There are parts of me that wish that I had mad better decisions in my youth in terms of school, work, adapting to responsibility versus trying to delay it for as long as possible. It's only now that I am returning to responsibilities that I once avoided not because of need, but because I'm ready for them and I want them.

I've always had the tenacity to be bouncing around from one thing to another. Something I got from my parents because that's the way we grew up. I can't help feel a bit foolish at how much I've changed and grown and how things are developing around me. November is always a time for reflecting for me, and reflecting I have been doing. I feel like a jackass at times too in that things I've said are either coming back to my face and smacking me or I'm redefining them into something positive.

None the less, I'm constantly working on not inhibiting myself from growing as a person in all shapes or forms. It's not easy and things aren't always planned, but that's just how things are veda? More than anything I'm grateful for the friends that I have, lending me their support in all shapes and forms. For too long, my answer to everything was because I'm undocumented, but not anymore. Now if things aren't working out, it's because I'm not doing my best to make them happen and my apathy gets the better of me. Like I said, it's not easy, but I'm making progress here and there.
Writen by El Random Hero at 11:45 PM