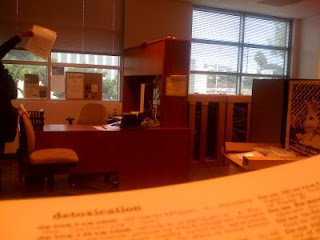 The dictionary defines detoxification as the expulsion of poisons from
ones body. I couldn't have said it better myself. To recap, I went to
go see my friend who I haven't seen in a while. She works and goes to
school tambien and any time in between goes to her bf. So yeah we're
talking and I realize in the middle of what I've been doing how happy
I have been since leaving the school paper. Seriously. I've gone out,
participated in education summits and have been happier over all.

She tells me what she's up to and it's not the same anymore. It's not
like it was before because drama between friends changes things. It's
obvious she has made her choice and in that respect I made mine. I see
her life and where she's going and it's the opposite of where I'm
going. I wondered for a bit what that would mean. As we grow older and
wiser we start to realize things.

I'm realizing that some of the people I called friends aren't friends
anymore. I realize that it was easy to be friends with them because
they were there and nothing else. It makes me think because people are
fake. People talk and change their minds. People do a lot of things
and sometimes I'm glad that I dint have to deal with them. I have my
own crap to deal with and dealing with anothers isn't fun. I've been
giving it thought.

Do I go at it alone leaving behind fake people who don't bring
positive energy into my life or do I continue to stay in contact with
them ? Those dynamics are interesting to me. I see they're errors and
I learn from them. What constitutes a friend to begin with ? You can
be around someone all your life and not know that person. At the
sametime you can meet a stranger and feel as if you've known that
person all your life. One thing is for sure though. I let you know
what I'm about up front. I don't pretend to do anything. Some people
don't know anything else but being fake. Sucks for them.