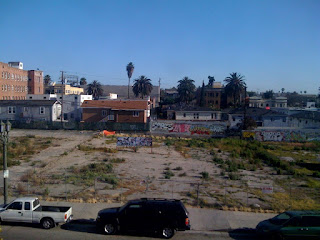 Breaking up with someone is an experience that everyone has experienced one way or another. When two individuals connect on deeper, more profound levels, trusting each other and sharing their feelings, deeply rooted connections are made. Those connections became like nerves in some relationships. If they're fragmented or cut, the pain is unbearable for both parties. That's what I saw today, nerves, roots and connections that have been severely fragmented by time and miss-communication, opened up again and sanitized and prepared so they can be closed, and so they can finally heal.

The "movement" here in California has been around way before I was even out of high school. By "movement," I mean the fight for immigrants rights and all the different shapes and forms it has taken over the years. For you see, the current "movement" I'm a part of, the DREAM Act and immigration reform, started in 2001 when AB 540 was introduced and passed in 2002, along with the first version the DREAM Act. I have had the pleasure and honor in meeting and talking to people who have been with the "movement" since those days. They fought to get that work done and they were there when it was all said and done. They have put in work and helped pave the way for the DREAM movement.

AB 540 passing was a pebble in a pound. The ripples it created were felt all over the state and change was happening. Major orgs started supporting and promoting the DREAM Act. Students who had the opportunity to go to college started creating undocumented student orgs on their campuses. The "movement" kept growing over the years as more students went on to college and more and more awareness was being raised on the DREAM Act. With each push that it got in Congress, the "movement" grew stronger and stronger.

Fast forward to November 2007 when a mock graduation in Downtown L.A. put together by all these groups and orgs working together, showed the power the "movement" has in organizing and making things happen. The DREAM Act failed to pass that year short of a few votes and people became disillusioned. They graduated from their schools, unable to use their degrees and in some ways, being pushed out of the "movement" because it's dominated by college orgs and students, which they no longer area part of. That's when rifs started coming into the "movement."

For years this all kept growing and it climaxed in 2009 when one of the major components of the "movement" switched the focus from DREAM to Immigration Reform. More people got left out and more nerves were cut. For soo long, there have been individuals that didn't like what was going on. They didn't like the direction of things and drama was starting between groups and individuals. Things were said. You can't take back what you feel and tonight, some of those past grievances were aired out. People were frustrated and felt betrayed that the "movement" was not focused or operated by and for youth like it was back in the day when it first started.

It's like, you're with someone, you break up and then you find out that while you were together they cheated on you. It's those feelings or anger, betrayal and spite. It happens. Fingers are pointed and names are called out. It was "interesting" to see people air out their grievances about past lives. The longer one holds on to the past, the longer we'll continue to live in it. But it was necessary. How can the "movement" continue on and move forward if the past is still holding us back ? These conversations are not finished, the scab has only begun to be picked at, but it's part of the healing process. Once the scab is gone and it heals, we'll have that scar to remind us of what can happen when miss-communication and personalities get in the way.

The "movement" has grown tremendously over the last couple of years and the youth that were there in the beginning are no longer youth. We're all getting older, getting our degrees and mentoring the next generation of youth coming in to the "movement." It's life passing us by. As the conversation continues, more drama will be aired out because it has to. A family that grows and fights together stays together and that's what the "movement" is all about. That's why I'm still a apart of it and forever will be. How can you deny a celestial calling to do work ?
Writen by El Random Hero at 12:54 AM