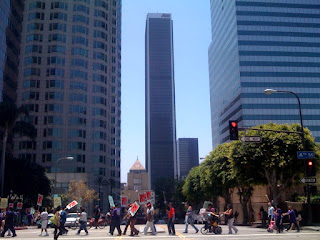 Today I am 27 years old. I could careless about my age, but I am
enjoying getting older. Seeing more white hairs in my locks, body
parts making all sorts of noises willingly/unwillingly and just
enjoying life for whatit is. It's not about the destination, but the
journey getting there that matters to me. That's why I've never made
it a point to celebrate it.

Part of that stems from my childhoodor lack there of, and because I
just don't like to. It makes me feel uncomfertable. That's why I don't
tell anyone or remind them, it's just another Tuesday to me. So today
insteadof getting drunk or going out, I protested.

In the morning I marched and played the drums with janitors taking
part in an action in downtown LA. It was an old fashion march to make
their presance known in their current campaign. It was pretty hetic
and well attended. Then I headed off to pickett a business in west LA
that is robbbing workers of wages & a few other labor law practices.

At the end of the day, I was too tired to do anythingbut shower and
lie down. All in all it was a good day. I also forgot to mention that
I saw Captin America at a midnight showing, so I was running of 5 hrs
of sleep. Totally worth it. Here's to another year around the sun, as
I'm one year closer to death. Happy deth day to me.