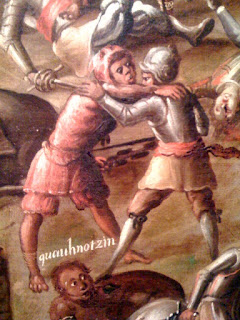 You best believe it's there. And booooy does it get dirty. I find myself sometimes thinking about the way things change for the worse and I come at a cross roads. I can either say something or I can keep it to myself. A third option comes up, but that's only when I'm at a dinner table and/or there's alcohol involved. But what do I mean by drama? Ahhh where do I start? And I should clarify that I speak for myself and my experiences, not for anyone else.

Inherently, most folks lives are dramatic. Usually involving an issue of hardship that pushes an individual into a corner and to make a decision that would be sound at the moment, but regrettable/questionable at a later time. At the same time, there's no such thing as a 'normal person.' No one is 'normal,' and anyone that identifies like that, stay away from them.

I'ved experience diverse classes of drama. Can't say that I have a preference since I try to avoid it when possible, but I'm also one not to stray away from it either. In fact, I attract drama like a flame attracts a moth. Over the years, I have learned many of lesson from the drama around me. To not date co-workers,  pick and choose your battles and to let your hatters be your motivators. That last one isn't really true, I just like it cause it rhymes.

So, in the immigrant rights, student, dream act, undocumented movement etc. there's plenty of drama going around. It goes in a top down, bottom up stream that  involves groups and orgs in cities, state and then national. There's everything from different groups not liking each other to national organizations that act like a married couple that don't even make eye contact when in the same room. It gets pretty sad after a while and like any good break up, sides are chosen and folks tyr to go their own way and avoid each other at all cost.

The drama itself can get elabore in itself, depending where it's starting, if it's personal or if it's just someone starting shit to start shit. My experience has been one of not liking people because they're just riffraff. Dirty as people that lie, cheat and steal to get anything done. I don't like people that have to lie to co-workers about their father being dead so they can get money outta them. That's just bad karma.

I have no problem with anyone doing their own thing and making things happen. Nor is my intention to call out specific people or groups because I don't like them anymore. No, if anything I'm trying to point it out the only way I know how, by talking about it from my point of view. There's more than one way to reach a solution and folks can go do things on their own terms if they don't like the spaces/people around them.

But at some point, the matter of accountability comes into question when their actions start reflecting not just themselves, but EVERYONE and the MOVEMENT itself. When it starts getting into that gray area, that's when I feel anyone involved in said movement has a right to call out said discretions and provokers need to be chin checked. When they start making everyone look bad, that's when the need to call them out and put them in check needs to be done.

But then, who am I to check anyone. To tell anyone what is right and or wrong. What works and what doesn't work. You see, at this point it's just easier to not saying anymore. To keep those passive agressive social media comments to oneself. It's not about me, it's about everyone. Sure, I can think of countless occasions in which I just rolled my eyes, but I alson know that things will get settled on their own accord.

Sooner or later, everything will catch up to all of us. All of that energy and intention that we put out into the universe. Therefore it's useless to waste energy in arguing with anyone. I just let them do their thing, I'll be here doing my own thing and make sure to let others know that I'm not with you and your agenda. But the drama will always be there. It's just human nature. To quote a great philosopher, shame on a nigga who try to run game on a nigga.